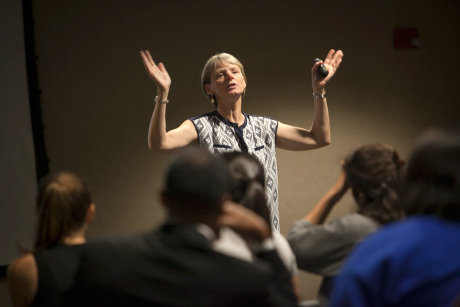 While the human capability to make quick judgments is important, our tendency to rely on our basic perceptions of other individuals can be detrimental to building integrated communities, said Maura Cullen, an authority on diversity issues on college campuses.

After meeting with groups on campus, including residence hall advisers, student athletes and Cornell staff, Cullen presented the lecture, “Taking Adversity Out of Diversity: Building Inclusive Organizations,” Sept. 11 in Willard Straight Theatre. She encouraged her audience to evaluate their inherent biases and recognize their ability to overcome them.

Cullen said that when interacting with individuals and strangers on an impersonal level, we tend to receive and internalize a one-dimensional view of them. Too often these superficial views are based upon group stereotypes.

“When people don’t know you, they will always treat you as your group identity,” Cullen said. “We don’t get treated at the individual level until we know each other.” Unfortunately, without deeper conversations, people may allow these often miscalculated “group identities” to overshadow the unique, individual qualities of those they interact with, she said.

“We tend to notice differences first. Does that make us bad people? No. It makes us people. Noticing is never the problem. It’s what we do after we notice that can be the problem,” she elaborated. Cullen explained that pretending diversity does not exist or matter is detrimental to the creation of safe and inclusive college campuses.

The homogenization of a group of people, or even worse, avoidance of those who are different from us in any way, does happen. For example, Cullen said that sometimes individuals might avoid new people they meet if they can’t pronounce their name because they feel uncomfortable.

She encouraged her audience to push beyond trivial discomfort and make the effort to get to know and properly recognize others. “Everyone has an accent,” Cullen said. “Who has the accent in the conversation is determined by who you are surrounded by and where you are.”

Unfortunately, avoiding conversations about the diversity of humans in our communities or avoiding people who are believed to be “different” can begin at a young age. Cullen described how parents often condition how their children interact around people with visible disabilities. When kids notice a person with a physical disability, say in the grocery store, parents may “send kids the wrong message when they shush them and tell them not to stare,” Cullen said.

To engage in conversation about the diversity of humans in our world – and specifically ways to improve the integration of the various communities at Cornell – are crucial, Cullen said. Inspiring audience members to continue to take action, Cullen concluded that together we can make a difference.

The lecture was sponsored by Student and Academic Services' Diversity Council.