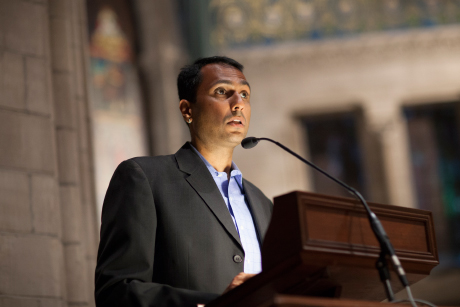 The population of the United States reflects a broader range of religious identities than ever before. From Christians to Muslims to Jews, fundamentalists to agnostics, the country is a mélange of beliefs. In such times, the key to a productive democracy is to encourage interfaith communication and cooperation, said Eboo Patel, an acclaimed interfaith leader who served on President Obama’s inaugural Advisory Council of Faith-Based and Neighborhood Partnerships.

Patel began with a depiction of the United States’ current religious landscape, which he described as “a polyglot mishmash hip-hop cypher of a nation,” where “identity is much more complicated than before, and [where] religion is much more flammable.” He said religious identity, while not enough to define an individual, is fundamental to the individual’s concepts of justice and morality. As such, religion is often inseparable from political views on contentious issues such as abortion and gay marriage.

A growing percentage of the U.S. population chooses “none” when asked to indicate a religious affiliation. Patel underscored the importance of including even these “nones” in interfaith dialogue, so that no one is marginalized. He said the only ground rule for interfaith dialogue should be that all parties enter into the discussion without hostility.

Patel stressed that the point of interfaith communication is not to resolve issues of justice and morality but to engage in rational discussion of difference and, ultimately, to appreciate others’ faith-based opinions without necessarily agreeing with them.

“The only way to have a religiously diverse democracy that is healthy and stable is for people who have deep disagreements on some fundamental things to be able to work together on other fundamental things,” Patel said. Examples include people of different beliefs working together to provide disaster relief or to form community organizations like soccer leagues.

Patel acknowledged that “nothing just happens in the world. The bridges of understanding do not fall from the sky or rise from the ground.” It is difficult to establish successful interfaith dialogue that neither avoids all contentious topics nor becomes overly politicized, he said, arguing that the keys to successful dialogues are good leaders who build bridges.

Patel serves on the Religious Advisory Committee of the Council of Foreign Relations and founded the organization Interfaith Youth Core. He is author of four books, including the forthcoming “Interfaith Leadership: A Primer.” He frequently shares his views on college campuses, has given TED Talks and spoke at the Nobel Peace Prize Forum. In 2011, Patel visited Cornell to present the annual Martin Luther King Jr. Commemorative Lecture, as well as to establish a partnership between Cornell Hillel and the Interfaith Youth Core.