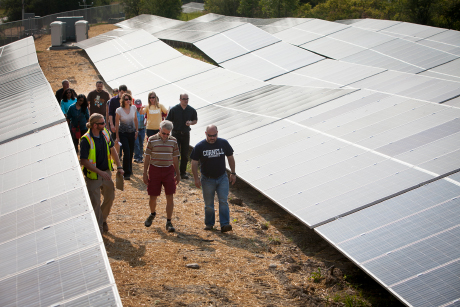 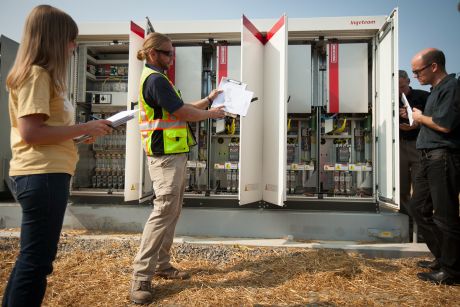 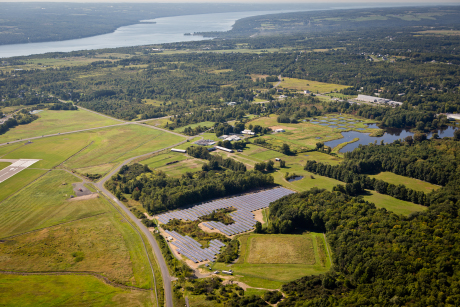 Jon Reis Photography
The entire Cornell Snyder Road Solar Farm, as seen from the air in the foreground, with a runway of the Ithaca Tompkins Regional Airport on the left. Click to enlarge

Annually, the 2-megawatt array will produce about 2.5 million kilowatt hours – 1 percent of Cornell’s total electricity use; that’s enough to power 320 homes for a year. It also will reduce the university’s greenhouse gas emissions by 650 metric tons.

“Cornell’s investment in the solar farm is one more step in realizing our Climate Action Plan goal of zero carbon emissions by 2050 or sooner,” said KyuJung Whang, vice president for facilities services. “Gov. Andrew Cuomo has established a goal to make New York a leader in solar development, and Cornell strives to set an example for the region and the state by reducing our carbon footprint.”

This project advances the goals of the Southern Tier Regional Sustainability Plan, developed in coordination with New York’s Regional Economic Development Councils, to obtain 2 percent of the region’s electricity from solar power by 2032.

The New York State Energy Research and Development Authority (NYSERDA) contributed about one-third of the project’s approximately $4 million cost while private developer Distributed Sun LLC, which owns and operates the array, secured the remaining capital. Cornell will buy the electricity produced through a power purchase agreement.

Distributed Sun is including 10 solar panels for academic use at Cornell and with local schools, and will include physical access for tours.

While the array is close to the airport’s runways, the solar panels won’t distract pilots, said Zemanick. “The panels are designed with anti-reflective glass to capture and retain as much sunlight as possible and convert it to electricity, rather than reflect it away.” A glare analysis was performed and accepted per Federal Aviation Administration rules.

The Snyder Road Solar Farm is located about two miles from campus at a site not slated for other uses. Cornell and NYSEG are using “remote net metering” to credit the university for electricity generated by the solar facility.

The public will be able to track the solar data, along with data from other Cornell facilities, through the university’s online building dashboard.