During an inspiring, humorous and highly candid talk to more than 420 people Sept. 18, Associate Justice Ruth Bader Ginsburg shared how Cornell shaped her journey to the U.S. Supreme Court.

Cornellians who survived demanding professors and unforgiving winters while developing a strong work ethic could relate. Ginsburg ’54 said that whenever she drafts High Court opinions, “changing the way the word order should go,” she remembers her European literature professor, Vladimir Nabokov.

The invitation-only conversation with Ginsburg at the New-York Historical Society, led by Gretchen Ritter ’83, the Harold Tanner Dean of the College of Arts and Sciences, often became personal and poignant.

Ginsburg said she was fortunate to have studied a broad array of liberal arts undergraduate courses. “Cornell is a school blessed with a fabulous faculty,” she said. “Even if in the engineering school, try to take advantage of a diverse education ... and remember the winter is the time to study,” she advised, to which Ritter replied, “It warms my heart as dean.” 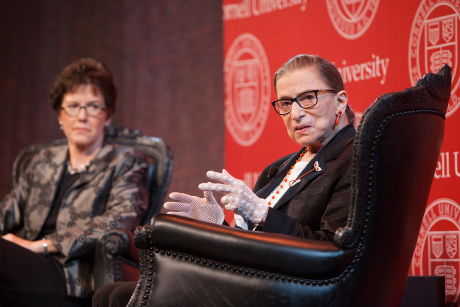 The jurist’s respect for the First and Fifth amendments is rooted in college research for Professor Robert Cushman in which she tracked “black lists” of the entertainment industry during the McCarthy era. She noted the university’s shunning of Professor Marcus Singer, a zoologist, who was told he could not teach while under the cloud of the Communist scare. Singer was convicted of 22 counts of contempt of Congress in 1956 but acquitted a year later. Ginsburg said she watched attorneys risk professional reputations to defend citizens’ constitutional rights before Congress.

Cornell also is where she was introduced to Marty Ginsburg, who became her lifelong mate until his death in 2010. She smiled as she recalled that her future husband “was the first guy I ever dated who cared that I had a brain.”

Having grown up during World War II as a Jewish working-class girl from Brooklyn, Ginsburg was keenly aware of racism. After teaching law at Rutgers and Columbia universities, she founded the Women’s Rights Project at the American Civil Liberties Union. She won five of six landmark cases argued before the Supreme Court against laws that discriminated against women.

In 1993, President Bill Clinton appointed Ginsburg as the second woman to the U.S. Supreme Court, joining Sandra Day O’Connor, whom Ginsburg said was like a big sister and stalwart mentor as she navigated a mostly male culture and bouts with cancer.

O’Connor, who had returned to the bench nine days after breast cancer surgery, advised Ginsburg to schedule her chemotherapy for colorectal cancer for Fridays so “you’ll get over it over the weekend and be back in court on Monday.”

Ginsburg said the hard, steady work helped get her through six weeks of radiation treatment beginning in 1999 and again a decade later when she suffered pancreatic cancer. As a cancer survivor, Ginsburg said she has “an enhanced appreciation of the joys of being alive.”

Looking to the future, Ginsburg said the court is likely to hear cases on technology, the environment and same-sex marriage.

Ginsburg, who loves attending summer operas in Cooperstown, New York, and Santa Fe, New Mexico, said a comic opera by Derrick Wang – based on her judicial disagreements with Justice Antonin Scalia – is set to debut next summer. One scene involves a bombastic Scalia cloistered in a dark room as a demure Ginsburg descends through a glass ceiling. Contrary to media hype, Ginsburg said the justices are the most collegial they’ve been in decades, issuing unanimous decisions 60 percent of the time during the last term and splitting 5-4 on just 10 cases.

Ritter and Ginsburg were introduced by Helen Harrison Appel ’55, a member of the board of trustees of the New-York Historical Society.

Jon Craig ’80 is journalist based in Westchester County, New York.