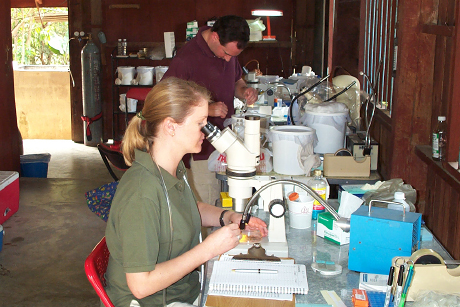 John Edman
Laura Harrington, front, and colleague Chris Bosio sort and identify mosquitoes collected in village houses in northwest Thailand. They separated the ones with blood in them and put them in buffer for DNA analysis.

Most people bitten by dengue fever-transmitting mosquitoes in four northwestern Thai villages weren’t residents but visitors, a finding that provides new clues about the spread of the dengue virus.

According to a new study, larger people and adults are bitten significantly more often than smaller people and children.

The study matched human DNA in mosquito blood meals collected from the villages to DNA of 676 village residents, whose cheeks were swabbed for their genetic profiles. Of 3,677 blood-fed Aedes aegypti mosquitoes collected and 1,186 complete DNA profiles, only 420 meals matched people from the study area; mosquitoes mostly fed on people who were passing through, reports the study published Aug. 7 in the journal Public Library of Science Neglected Tropical Diseases.

“This is by far the biggest study to use this approach to examine mosquito feeding on individual hosts,” said Laura Harrington, professor of entomology and the paper’s lead author. “Our goal was to understand transmission and risk of dengue fever infection from A. aegypti mosquitoes.”

The dengue virus infects an estimated 390 million people in the tropics each year and can be fatal. Because there is no vaccine to fight the virus and no treatment, controlling mosquitoes has been the only way to prevent infections.

“We need to understand more about who the mosquitoes are feeding on and why to understand who is at risk and how to break the cycle of infection,” said Harrington.

In other findings, 10 to 13 percent of mosquitoes fed on more than one person within 24 hours, and most multiple meals were from people who lived in the same house as the mosquito or neighbors. Also, 43 to 47 percent of mosquitoes fed daily. “That’s pretty significant. This mosquito is feeding very frequently and potentially transmitting virus with each bite, leading us to grossly underestimate the potential dengue transmission rate,” Harrington said.

For one village, the local market proved to be a hotspot for feeding during the rainy high-dengue-transmission season, inviting the question of whether people were more at risk there during that time.

Experiments also showed that people with the highest body mass were fed on the most.

The study revealed an epidemiological paradox: Despite low Aedes aegypti mosquito populations in the study area and low movement of these mosquitoes, human infection rates of dengue were high, as evidenced by residents’ immunity to all four dengue virus strains by the time most become adults. Even with immunity, adults are bitten at much higher rates than children, who haven’t developed immunity and are the only hosts that can serve as a source of the virus for mosquitoes in the population.

Future research will investigate why infection rates are high when children are not fed on most; how feeding on visitors affects the spread of dengue; and whether hotspots like markets may play a role in transmission, Harrington said.

The research was funded by the National Institutes of Health and the Atkinson Center for a Sustainable Future’s Climate Change and Disease Program at Cornell.