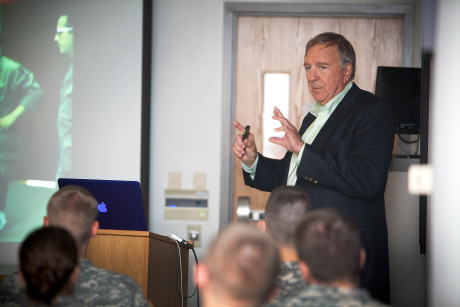 After completing medical school and surgical training, Gus Kappler ’61, M.D. ’65, was drafted into the army as a trauma surgeon and arrived at a hospital at Phu Bai, Vietnam, in September 1970.

In his Sept. 23 campus presentation, “Battlefield Trauma: Vietnam to Afghanistan,” Kappler offered a harrowing glimpse into his Vietnam experience. One slide in his presentation pictured the doctor and fellow soldiers relaxing in a makeshift pool. Others portrayed graphic images of his maimed patients, a nurse in a recovery room surrounded by peace signs and the halfway house where soldiers “smoked all the pot they could” to help them detox from heroin.

“The worst part of all this,” recalled Kappler of the latter image, was that “the recalcitrant soldiers – the druggies – were put into special platoons, and they were sent on the most dangerous missions you could find, the idea [being] to eliminate them.”

In the chaos of war, Kappler and his fellow surgeons “performed miracles,” he said. “Often we would two-team the patient; one would work on the arm and one would work on the abdomen.” With only one X-ray machine, frequent rocket attacks and monsoon flooding that resulted in having to “put some frogs in [the operating room] to eat the mosquitos,” Kappler said he fought an uphill battle to save lives.

“Before Vietnam, I was drafted and I was angry,” Kappler said. “I went to see the movie ‘M*A*S*H,’ and I said ‘OK, there’s Donald Sutherland. I’m going to act just like him, and I’m going to survive.”

Decades later, Kappler has continued to support and promote veterans’ rights, addressing issues within the U.S. Department of Veterans Affairs. “Two in 10 who served in country have died prematurely,” Kappler said of Vietnam veterans. “This is the cost of war decades later.”

He said soldiers in Vietnam were routinely exposed to solutions containing two parts per million dioxin, the toxic compound in the herbicide Agent Orange. “Five parts per trillion caused cancer in laboratory rats,” Kappler said. “The U.S. government and Presidents Johnson, Kennedy and Nixon were fully aware of the toxicity, and they still dumped it on us. To me that’s criminal.”

There is an estimated toll of “about a million and a half deaths,” Kappler said, when combining all combatants. There are hundreds of thousands of Agent Orange-related deaths and birth defects in both our veterans and the Vietnamese people. “And this poison is still decimating the Vietnamese because the depots where it was stored are still rampant with dioxin.”

A great deal changed between the Vietnam War and Operation Enduring Freedom in Afghanistan, Kappler said, but he believes aid provided by the VA “has to change. … The U.S. military does a great job of teaching you how to kill … but the military does not do anything to teach soldiers to readjust to society. All veterans that go to war are permanently changed.”

He continued: “Killing just sort of rips the soul out of you to a certain degree, and you have to get that soul back in you before you can become a functional citizen again.”

Soldiers are “judged by a politically correct, factually censored, unsupportive society,” Kappler said, and this, accompanied by the military expectation of machismo, leaves veterans feeling isolated.

“There’s nothing wrong with hugging your buddy,” he concluded. “We call it brotherhood. … Brotherhood is the macho phrase for showing love of your fellow man. Soldiers should be given the opportunity to break down and be comforted by their buddies.”