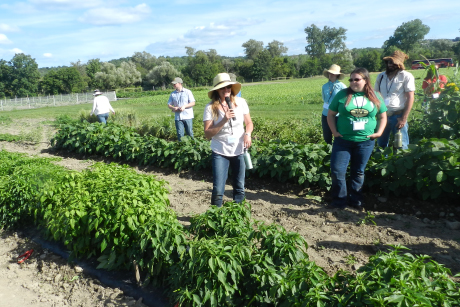 Albert Culbreath
Participants of the Student Organic Seed Symposium tour a Finger Lake farm as part of their trip to the area Aug. 17-21.

Almost everyone knows that plants grow from seeds, but what about communities? The third annual Student Organic Seed Symposium, held at Cornell Aug. 17-21, proved that both are possible.

The symposium drew 27 students and 19 professors, nonprofit constituents and seed company representatives to the Finger Lakes region for a week of tours, lectures and networking.

They explored ways to build dynamic communities with the capacity to develop food crops and food systems for the sustainable agriculture of a turbulent future. And they started with seeds.

Despite a growing consumer interest in organic food, few consider the seeds at their origin. They should, according to Michael Mazourek, Ph.D. ’08, the Calvin Noyes Keeney Assistant Professor of Plant Breeding at Cornell.

“It all starts with the seed that you plant. You want a seed that reflects those values,” he said.

Mazourek shared his expertise with colleagues representing a diverse range of fields and regions.

Albert Culbreath, professor of plant pathology at the University of Georgia who presented his work on organic farming practices and disease management in peanuts, said he gained valuable insights into successful practices in other crops that he is eager to apply on his own fields.

“A lot of what we’ve learned about vegetable marketing and production, value-added wheat and other crops can be applied to peanuts,” Culbreath said.

Humberto Rios Labrada, the Latin American representative for the International Centre for Development Oriented Research in Agriculture, came from Bolivia to speak about his efforts to shift the focus of agricultural research to include farmers as well as universities. He said he learned as much from the young scientists as he did from the seasoned academics.

“In organic agriculture, the innovation system needs to be changed in order to generate benefits at the local level,” Labrada said. “I see here young faces who want to do something different.”

The event was primarily coordinated by graduate students who worked to ensure that other students who wished to attend could do so at a low cost.

Tessa Peters, a Ph.D. student at the University of Wisconsin-Madison, said she appreciates the camaraderie that the conference inspires among its student participants, who often feel isolated at universities where conventional agriculture is still the norm.

“It’s nice to get together with a group of people who share the same values and are trying to promote the same kinds of seed systems that I believe in,” Peters said.

“At a lot of conferences, you really just experience a hotel,” Luby said. “I think one of the unique things about this conference is that it not only allows people to build these connections, but you also get to meet farmers and seed growers in the area.”

“Ithaca and the Finger Lakes region have so much to share. It’s really great to be able to do this service for the organic community,” Wyatt said.

Andrea Alfano ’14 is a writer for the College of Agriculture and Life Sciences.