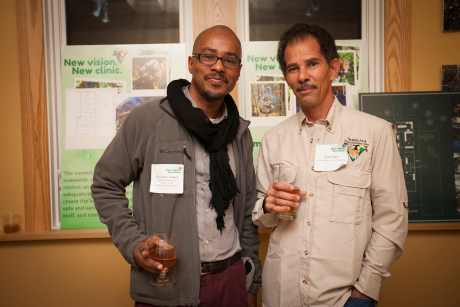 Jason Koski/University Photography
Avery August, professor of the Department of Microbiology and Immunology in the College of Veterinary Medicine, left, and Tony Garel, head of animal management at the Belize Zoo, at an Oct. 25 fundraiser.

If the Oct. 25 fundraising event was any indication, the Belize Zoo has a strong foothold in upstate New York. Nearly 100 people, including supporters from Cornell's College of Veterinary Medicine, the Cornell Institute for Public Affairs (CIPA) and SUNY-Cortland, welcomed staff from the Belize Zoo to the Ithaca area for 10 days of education events and meetings. The fundraiser launched a capital campaign to build a new commissary and hospital for the zoo and took in $13,400.

The Belize Zoo is a client of the CIPA capstone program, which offers students pursuing a Master of Public Administration (MPA) degree the opportunity to participate in a pro bono team consultancy clinic. Laurie Miller, CIPA associate director for public engagement, and her team of graduate students will create a fundraising plan for the zoo and initiate targeted fundraising events to support the zoo’s new clinic. The project will cost between $100,000 and $300,000.

“Combining efforts between CIPA, the College of Veterinary Medicine and SUNY Cortland was a natural fusion,” says Miller. “All of us are really invested in the long-term success of the zoo.” The two schools have established programming with the zoo.

“The zoo is more of a biopark than a zoo,” explains Kollias. “It encompasses native flora and fauna set in a very naturalistic environment. It is built right into the jungle.”

The facility cares for more than 150 animals native to the Central American country and is committed to the conservation of Belize’s wildlife and its habitats.  It is the No. 1 source of conservation education in the country. The resident animals were brought to the zoo because they had been injured or orphaned or they were born in the zoo.

In the past three years, Kollias has taken nearly 50 veterinary students to Belize. “There, our students have the opportunity to experience the practice of veterinary medicine in a developing nation where you don’t always have everything that you need or want. They soon discover that they need to be innovative and creative,” he says.

A veterinarian specializing in zoo and wildlife medicine, Kollias has more than 40 years of experience in the field. “There are no ‘card carrying’ zoo and wildlife medicine specialists in Belize,” he says. “Actually there are only a few veterinarians there at all. I am working to set up a comprehensive preventive health program, including a feeding and nutrition program, for the animals at the zoo. I also have been working to train zoo staff in wildlife nursing and care.”

The capital campaign that the CIPA students are planning will fund construction of a new clinic facility and commissary building, where the animals are fed. The new commissary and medical space will be named the George Kollias Clinic.

Zoo founder and director Sharon Matola and her team are grateful for the support they have received from Cornell and SUNY. “Cornell has played a profound role in the development of the zoo,” she says. “Many of our animals are rare, endangered species. We’re very cognizant of the fact that they’re extinct in other parts of Central America.”

The Belize Zoo receives no financial support from the government of Belize and generates funding through admission fees, tours, donations, and adoption and membership programs. To donate to the Zoo, send a check to: Cornell University, College of Veterinary Medicine, Alumni Affairs and Development, Box 39, Ithaca, NY 14853 and write Cornell-Belize Wildlife Program in the memo line.