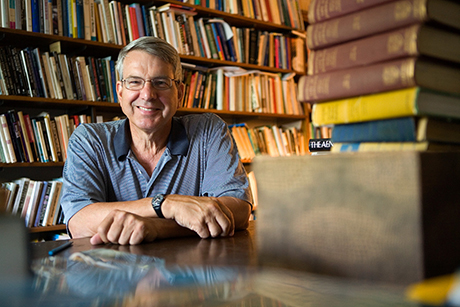 For a quarter of Cornell’s 150-year existence, Jonathan Culler, the Class of 1916 Professor of English and Comparative Literature, has been teaching and writing at Cornell. On Oct. 3-4, a conference celebrated his 70th birthday as well as many former and current students he’s taught in his 37.5 years on the Hill.

“Jonathan Culler is a great scholar, thinker and teacher whose work has played an outsized role in shaping informed discussion of literary theory,” said Marc Redfield, M.A. ’85, Ph.D. 90, chair of comparative literature at Brown University, who spoke at “Literary Theory at Cornell: A Celebration of Jonathan Culler and His Students.”

“His legacy is that more than anyone else he has made theory – especially literary theory – a force to contend with,” said Srinivas Aravamudan, Ph.D. ’91, professor of English, Romance studies and the Program in Literature at Duke University.

Cathy Caruth, the Frank H. T. Rhodes Professor of Humane Letters, surprised Culler with the announcement that she’d arranged for two books to be published in his honor: a Festschrift of papers presented at the conference and other papers by Culler’s former students, with Redfield as lead editor, and “The Jonathan Culler Reader,” a collection of his writings to be edited by Culler’s most recent graduate student, Avery Slater, M.A. ’11, Ph.D. ’14, now a postdoc at the University of Texas at Austin.

Said Caruth: “The reader will give students and scholars a sense of the range of [Culler’s] important work and will also introduce them to important articles of which they may not have been aware.”

But while Culler’s books are widely available – they’ve been translated into more than 25 languages – “the experience of live transmission remains significant,” said Ann Cvetkovich, M.A. ’85, Ph.D. ’88, professor of English at UT Austin. “I was excited to have the opportunity at Cornell to learn directly from Jonathan.” She also recalled a guest lecture by Jacques Derrida that Culler organized for his Literary Theory survey class – a version of which he is currently co-teaching with Caruth.

“Jonathan’s record of mentoring and training graduate students is arguably the most impressive of his many accomplishments, as the truly stellar lineup of the conference panels illustrates,” said English chair Roger Gilbert. “Despite his busy writing and speaking schedule, he’s been remarkably generous in his readiness to work with students in an amazingly diverse range of fields.”

Added Cvetkovich: “Jonathan’s mentorship of grad students took place not just through courses and dissertation supervision but through the other kinds of professional opportunities he generously made available to them – including serving as TAs for his introduction to theory course or as research assistants for his books and other publications. These experiences helped shaped people's professional identities as theorists and helped them to get jobs.”

Many of the conference speakers emphasized Culler’s lucid writing and how he conveys the force and significance of concepts as fairly and accurately as possible. Culler is an expert in multiple fields – deconstructionism, structuralism, lyric poetry, and more – “and even when there are other books on the same topic his books tend to be the best because they are the clearest, subtlest, most nuanced in the way they give accounts of extremely complicated theoretical ideas,” noted Gilbert.

Said English professor Harry Shaw: “Jonathan has helped to create a lively intellectual life here at Cornell, in and beyond his home departments of English and comparative literature. He is a brilliant reader of other people’s work, showing you things you didn’t see in your own writing, and he’s generous in agreement and disagreement.”

Culler’s literary theory scholarship is among the most highly regarded in the field. The publication of his book, “Structuralist Poetics: Structuralism, Linguistics and the Study of Literature” (1975, revised 2002), which won the James Russell Lowell Prize from the Modern Language Association, earned him a reputation as a pre-eminent American exponent of structuralism, a set of approaches to culture, linguistics and literary meaning. His other seminal texts include “On Deconstruction: Theory and Criticism after Structuralism” (1982), “Framing the Sign: Criticism and Its Institutions” (1992) and “Literary Theory: A Very Short Introduction” (1997).

Culler’s honors include a Rhodes Scholarship and fellowships from the John Simon Guggenheim Memorial Foundation and the National Endowment for the Humanities. He has served as president of the American Comparative Literature Association and is a member of the American Academy of Arts and Sciences and the American Philosophical Society. He is secretary of the American Council of Learned Societies.

At Cornell, Culler has served as chair of three departments (English, comparative literature, Romance studies), as senior associate dean and as director of the Society for the Humanities. He recently served on the committee to select Cornell’s new president.

Before his arrival at Cornell in 1977, Culler taught at the Universities of Cambridge, Oxford and Yale. In 1982 he was awarded the endowed chair previously held by M.H. Abrams (the Class of 1916 Professor of English). He earned his B.A. in history and literature at Harvard University in 1966 and a B.Phil. in comparative literature in 1968 and D.Phil. in modern languages in 1972, both at Oxford.