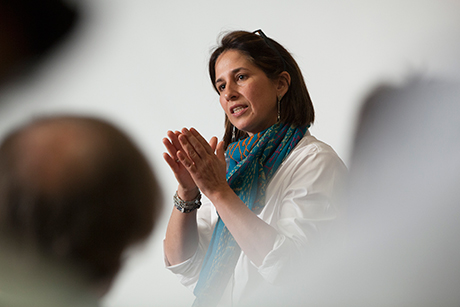 Hackneyed though it may seem, the phrase “follow your dreams” aptly summarizes the philosophy María Pacheco, M.P.S. ’90, a Fulbright scholar, consultant to the United Nations Foundation, and founder of Wakami, a company changing the way craftspeople enter the international market.

Pacheco discussed her efforts to promote small-scale, sustainable businesses in her native Guatemala in the Oct. 6 lecture, “Wakami: A Value Chain That Connects and Transforms People and the Earth,” sponsored by the Iscol Family Program for Leadership Development in Public Service.

The lecture gave Pacheco the opportunity to return to Cornell for the first time since receiving her master’s degree in biological agriculture from the College of Agriculture and Life Sciences.

Pacheco’s family moved to the United States when she was 12 and returned to Guatemala after four years. Her time in the U.S. allowed Pacheco to see her war-torn, poverty-stricken country with fresh eyes. Despite the devastation she saw, Pacheco maintained a vision of a peaceful, prosperous Guatemala, and that dream propelled her through school and back to her native country.

“I decided I couldn’t change the world, but I could create my own world,” Pacheco said, describing her first project after graduation, an organic farming program in a rural Guatemala village. She went on to foster another program in which women supply hand-woven products to various international companies.

“It’s through a business-driven model that we can create sustainable change,” she said, summarizing what these experiences taught her.

Pacheco also expressed the importance of working with women in Guatemala, a country where gender inequality is ubiquitous. “When income goes to women, the impact goes directly to the families and the communities,” she said. Although in some cases men were initially resistant to their wives participating in the projects, Pacheco said that once they saw the income their wives could make, the men began to value women more.

In 2006, having seen the success of her previous projects, Pacheco decided to start her own business. She and her cousin, Queta Rodriguez, founded Wakami, a lifestyle brand specializing in handcrafted bracelets made by Guatemalan women. Wakami now employs hundreds of artisans and exports its products to a dozen countries. Pacheco plans to expand the product line and find more international distributors.

“Wakami is a Mayan word which means ‘it already is,’” Pacheco said. To the people at Wakami it means that Pacheco’s serene dream for the world already exists and “we just have to find a gate into it.”

Pacheco stressed that the key to creating sustainable, localized businesses is to start by asking community members what change they want to see, what skills they can contribute and what local resources might be put to use to create products.

She said rural villages have all they need to become productive, and said she dreams of “a system where we export products from the villages instead of exporting people.”

Jill and Ken Iscol, founders of the Iscol Family Program for Leadership Development in Public Service, attended the lecture. Pacheco is featured in Jill Iscol’s recent book “Hearts on Fire,” which tells the stories of 14 young visionaries.