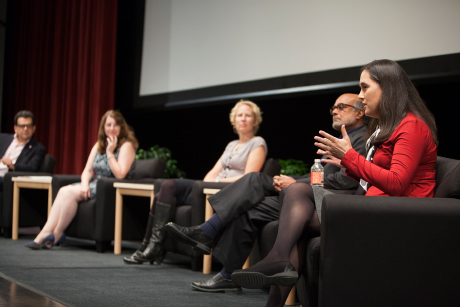 Six Cornell professors – each with distinctive areas of study – provided 10-minute presentations on the university’s comprehensive, international impact at “Talks in 10: Engagement, Sustainability and Global Cornell” at Bailey Hall on Oct. 17, for the combined Trustee-Council Annual Meeting and Homecoming weekend.

Host Barry Hartstein ’73, vice chair of the Cornell University Council, explained that Cornell is devoted to scholarship, teaching and research, but the university is “applying that research to help people in the real world,” he said. As professors work with students to provide solutions to problems, Hartstein continued, the future students “will become problem-solvers in this new, challenging global environment we’re dealing with.”

For the public engagement part of the program, Steve Strogatz, the Jacob Gould Schurman Professor of Applied Mathematics, explained that writing his New York Times online column in 2010 was “one of the most exhilarating experiences” of his career, as the bright Times readers told the professor about their aha moments learning about math through his column.

Juan Hinestroza, associate professor of fiber science, captivates the public in a fashionable way by “making cotton do things,” he said. Hinestroza explained how his research seeks to understand phenomena at the nanoscale level, relevant to fibers, polymer science and wearable technology. He discussed how electronic devices, like cell phones, could be charged using clothing, and he discussed how his students pair with senior citizens from the Ithaca area to find unique solutions to problems faced by aging diabetic and arthritic adults.

Examining sustainability from the organic solar cell perspective, Paulette Clancy, the Samuel W. and Diane M. Bodman Professor of Chemical and Biomolecular Engineering, said that while solar energy is in great abundance, there are still technical, economic and institutional problems in harnessing it. Clancy described how the future could involve inexpensive solar cells from “printed” material (like printing a newspaper) or sprayed on surfaces like spray paint, or incorporated into everyday materials like glass windows.

Lindsay Anderson, assistant professor of biological and environmental engineering and the Norman R. Scott Sesquicentennial Fellow, explained large-scale energy systems and spoke about her research in Kenya with the Lake Turkana Wind Power project, which seeks to deploy paired wind and pump hydro-storage resources, with the hope of making up to 30 percent more renewable and sustainable energy in the next 15 years for Kenya – a huge energy step for the country.

Professor Prabhu Pingali holds a joint appointment with Cornell’s Charles H. Dyson School of Applied Economics and Management and the Division of Nutritional Sciences. As the founding director of the Tata-Cornell Agriculture and Nutrition Initiative, he explained to the Bailey audience how India is a global epicenter of childhood stunting due to a lack of good nutrition. Pingali explained how agriculture can provide the framework to improve nutrition through better food access and the allocation of more food to women and children.

Victoria Beard, associate professor of city and regional planning and a fellow at Cornell’s Mario Einaudi Center for International Studies, researches the alleviation of global urban poverty. In her talk, she focused on the conditions of dense urban squatter settlements in the “global south,” which consists of Africa, Latin America and developing Asia, including the Middle East. Her talk described how local residents organize to alleviate poverty, specifically access to basic infrastructure and services.