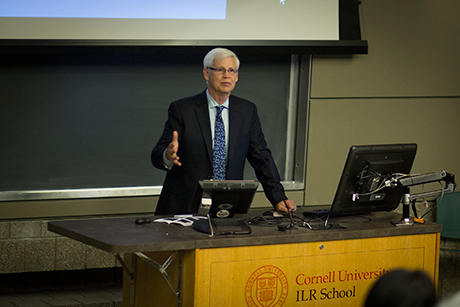 Econometrics is the application of math, statistics and computer science to economic data, a “tool that helps you understand the way the world is,” Engle said.

In the aftermath of the 2008 crisis, Engle said many financial institutions are still taking on too much risk and are collectively creating a system susceptible to collapse.

“My belief is that it’s still possible to rescue financial institutions under Dodd Frank,” he said. “If institutions believe they can still be rescued, it is possible they believe they’re not completely on their own if they fail.” In this case, firms take on more risk knowing that if they fail, U.S. taxpayers will bail them out.

“Good regulation is prevention, not rescue,” Engle said. The amount of capital a financial institution needs to raise to function normally if we have another financial crisis is a cushion sufficient to prevent a crisis. He said firms should hold at least that amount of capital to mitigate systemic risk.

This capital value, “SRISK,” can be computed for financial institutions and aggregated for countries to illustrate capital shortfall or the capital needed if we have another financial crisis. Engle’s model incorporates a time series model of equity returns and characteristics important for systemic risk such as size, leverage and interconnectedness of firms.

Additionally, the model accounts for changing volatilities and correlations in market values with an ARCH (autoregressive conditional heteroskedasticitity) function. When calculations are made for 1,200 financial institutions around the world, we find the aggregate amount of capital we’d need to prevent collapse in the case of a global financial crisis.

“The total number is around 3 trillion USD, which is not zero,” Engle said. “There is still a big risk out there. I would feel a lot more comfortable if this number had come down a lot more since the crisis, in order to say we solved it.”

Estimates of systemic risk calculated with Engle’s econometric model are updated weekly on the Volatility Institute’s website. While the estimates calculated illuminate a high level of financial instability in our financial markets, they also provide an opportunity to craft effective preventive policies based on empirical predictions.

Engle delivered the T.C. Liu Lecture in honor of his former professor, Ta-Chung Liu, Ph.D. ’40, who was best known for his contributions to econometrics, economic theory and influence in economic policy. Engle says that T.C. Liu was an excellent empirical econometrician. “I think this [empirical economics] blend of theory and practice, that I learned from him, is a powerful mix.” He continued, “I had a great experience at Cornell in grad school, and T.C. was fabulous as an adviser, econometrician and a friend.”