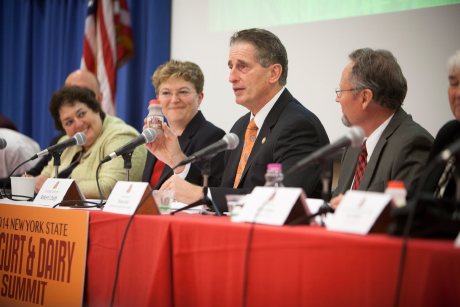 Duffy explained how Cornell helped the state’s producers achieve economic success by conducting and disseminating research through Cornell Cooperative Extension. “What an appreciation I have for what we are achieving in New York state … [which] we could not achieve without Cornell University in terms of agriculture and including dairy, wine and all the various agricultural entities. Cornell we are blessed to have,” said Duffy.

Kathryn Boor, the Ronald P. Lynch Dean of the College of Agriculture and Life Sciences, reinforced then university’s commitment to New York’s agricultural industry. “We are pleased to partner with you in today’s proceedings – which lead to our fulfilling our land-grant mission – by serving the broad spectrum of needs here in our state’s dairy industry,” said Boor. “Our college is committed to meeting you every step of the way in supporting and continuing to grow our dairy industry, which is the largest segment of the state’s food and agriculture economy.”

Duffy provided an update on the Dairy Acceleration Program, which is run by Cornell’s Pro-Dairy Program in partnership with the New York Departments of Agriculture and Markets and of Environmental Conservation. Since the first Yogurt Summit at Cornell two years ago, Cuomo has committed $1.85 million in grants for small dairy operations within the state. About 100 farms have participated in the last year, with 20 receiving help with their business plans, 36 gaining help with their nutrient management plans and 42 receiving help with both.

Got lots of milk? New York farmers produced 13.5 billion pounds of fluid milk in 2013 and supply most of the Northeast in milk and dairy products. In yogurt, cream cheese and sour cream production, New York is the nation’s top producer. For fluid milk, the state holds the No. 3 spot.

The industry leaders heard several success stories, including one from Cayuga Milk Ingredients of Auburn, New York, where farmers sought to reduce transportation costs by building a facility to make powdered milk for exportation. They use 2 million pounds of milk each day and have created more than 60 jobs.