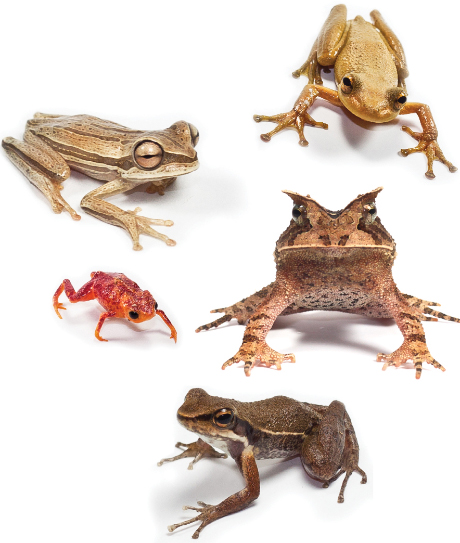 Gui Becker
A collection of amphibians from Brazil’s Atlantic Rainforest, where the study was conducted.

When a community is biodiverse with many different species, the risk of disease decreases, according to a new study that uses experiments to understand the mechanisms for this pattern, called the “dilution effect.”

Researchers have debated for decades whether biodiversity itself buffers disease or whether the composition of species in a community is the true indicator of higher and lower rates of disease.

For example, imagine that a forest is cut down and many frog species lose their habitats and die out. Still, a few species survive but they become infected with a pathogen and also die. Some researchers argue that the disease may have spread because these remaining species had low immunity to the pathogen, as opposed to loss of biodiversity per se. This explanation suggests that disease spread is a result of change in species composition in a community.

“We actually show that diversity alone can predict the risk of disease even after controlling for the effects of species composition,” said C. Guilherme Becker, Ph.D. ’14, the first author of the study published Oct. 8 in the journal Proceedings of the Royal Society B. Becker was a graduate student in the lab of Kelly Zamudio, professor of ecology and evolutionary biology in the College of Arts and Sciences and a co-author on the paper. Becker is a junior researcher in tropical disease ecology at State University of Sao Paulo, Rio Claro, Brazil.

“This is the first study to disentangle biodiversity from the species composition” in a community with respect to disease, said Becker.

Becker and colleagues set up more than 50 experimental populations in terraria with varying levels of biodiversity among frog species. They then introduced a waterborne fungal pathogen Batrachochytrium dendrobatidis (Bd) into the water in each terrarium. Bd is deadly to many frog species and has decimated populations globally. In the experiments, “we controlled for every effect of species composition across many unique host assemblages,” Becker said.

The researchers found that diverse communities developed less disease. “This happened because different species occupy different habitat zones, so there is a reduction in contact rate [between species] and therefore pathogen transfer, and that’s the likely cause of lower disease,” Becker said.

The research also showed that the level of immunity in a species played a role. A species that is highly susceptible to Bd, for example, can disproportionately infect neighboring hosts through direct contact, as opposed to a species with evolved immunity, which may not transfer the disease as well.

Human-induced changes to habitats such as deforestation or pollution can decrease natural habitat and make communities less diverse. In some cases, population densities of just a few surviving species may increase, leading to more contact between individuals where a generalist pathogen might transfer and spread.

“The findings have practical implications for understanding and predicting disease spread,” said Becker. “Protecting natural communities will help reduce the risk of wildlife epidemics,” he added.

The study was funded by the National Science Foundation, the Atkinson Center for a Sustainable Future, and the Department of Ecology and Evolutionary Biology, among others.