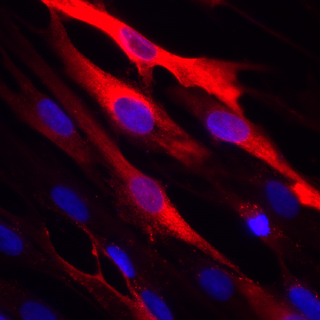 Courtesy of Jean Millet
Microscopy image of human cells infected with MERS-CoV, with viral spike protein in red and cell nuclei in blue.

Cornell researchers have uncovered details of how the deadly Middle East respiratory syndrome coronavirus (MERS-CoV) enters host cells, findings that help explain how it can infect many cell types – a hallmark of viral pathogenicity. The results also offer possible new avenues for treatment.

There is currently no cure for MERS, a respiratory illness that can lead to renal failure and kills 35 percent of the people it infects. MERS-CoV may have originated in camels, though bats also carry a form of the virus. Since MERS was first detected in humans in 2012 in Saudi Arabia, more than 830 people have fallen ill worldwide, mostly in the Middle East, Europe and Asia, with a few cases in the United States.

The study, appearing online Oct. 6 in the Proceedings of the National Academy of Sciences, marks the first time researchers have used Cornell’s Biological Safety Level 3 facility located in the Animal Health Diagnostics Center. This allowed the study’s authors, Gary Whittaker, professor of virology, and Jean Millet, a postdoctoral associate in Whittaker’s lab, to work safely with the live virus.

The researchers discovered that a common protease enzyme known as furin activates the MERS-CoV to fuse with cell membranes and enter host cells.

Millet and Whittaker suggest that blocking furin at a specific point in the host cell entry process could lead to a treatment by preventing the virus from getting into cells, where it uses the cell’s reproduction mechanism to make new viruses.

Coronaviruses have a spike protein that is activated by a protease and mediates membrane fusion and entry into a host cell. The location on the spike protein where a protease activates this process is called a cleavage site.

The researchers found there were two cleavage sites for MERS-CoV, each activated by furin at different times: after a new virus is assembled inside a host cell, when the virus makes its way out of the host cell to the cell surface, and again, when the released virus finds a new cell and is taken up into the membrane.

“This is the first characterization of a natural coronavirus with a spike protein containing two furin cleavage sites,” said Millet, the paper’s first author.

“It might be a situation where that extra cleavage site is allowing more spread in the animal or human,” said Whittaker. With MERS, “the primary infection is in the lungs, and even there it infects additional cell types,” including immune cells, which could allow dissemination throughout the body, he added.

One way viruses mutate is by changing the protease they use for activation. “This study shows how flexible coronaviruses are in terms of cleavage activation strategies,” said Millet. “They are extremely adaptable.”

The researchers suspect that a MERS-CoV in camels may have mutated two and half years ago, allowing the virus to infect humans. At present, the virus does not spread easily between people, except during hospital-acquired outbreaks.

Societies in North Africa and the Middle East have strong cultural connections to camels, where “there are a lot of activities that expose people to raw camel products – milk, urine – which could be the root of infection to humans,” said Whittaker.

Another coronavirus in the same family as MERS-CoV is severe acute respiratory syndrome (SARS), which spread globally in 2003, appears to have originated in bats, and was transmitted to civets, a small mammal native to tropical Asia and Africa.

The ongoing investigation is funded by a two-year, $418,903 award from the National Institutes of Health.