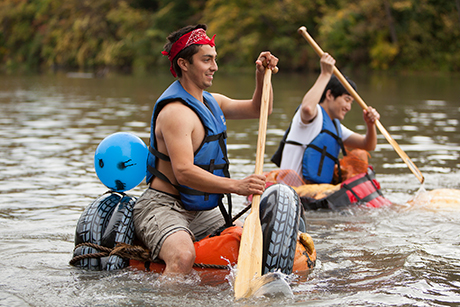 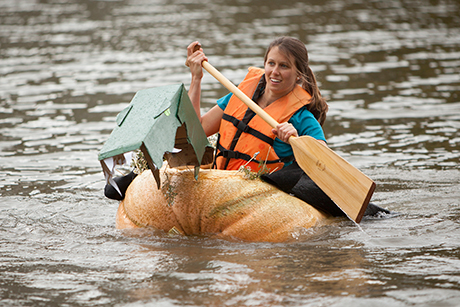 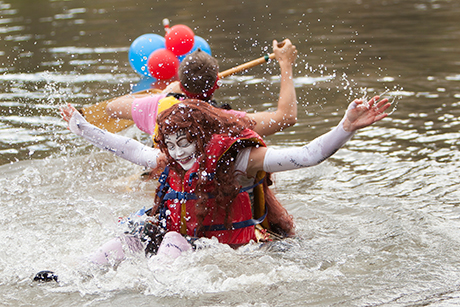 At midday Oct. 4 on Beebe Lake beach under steady rainfall, eight teams of Cornellians scrambled to make final adjustments to their home-grown watercraft, decorating their boats – and themselves – with flowers, balloons, nylon rope and life jackets. The crowd of participants’ friends and passersby quickly grew from several dozen to around 100.

As the Big Red Pumpkin Regatta began, racers fought to gain control of their boats. Many ended up improvising – some forgoing oars and paddling with hands and feet, others dragging the pumpkin with them as they swam, laughing all the way.

Eight four-person teams competed in the 100-meter relay race along the Beebe Lake shore, rowing to and from a buoy marked with balloons. The regatta, which featured hollow 200-pound pumpkins grown at the Dilmun Hill Student Farm, was hosted by Cornell Flotilla, a graduate student club, and organized by Peter DelNero, a Ph.D. student in the field of biomedical engineering.

DelNero said he wanted to bring the Cornell community together for fun away from studies. “Part of the vision of this event is to spark people’s imagination and remind them of the cool things you can do,” he said.

The regatta had a relaxed and welcoming atmosphere, and drew students from across campus as well as alumni, who found out about the event through postings and word of mouth. Teams cheered each other on through every small breakthrough in controlling the pumpkin boats.

“No matter what, we’re winners,” said Evan Greenberg ’16, an environmental engineering major and captain of the team calling themselves Pumpkin Spice Latte. The team’s pumpkin was adorned in life jackets and red, white and blue balloons, with “America” spray-painted on its side.

First place went to Canoeligans, a team consisting of kickball team members, while second and third place went to teams Pumpkin in the Sun and Oogie’s Revenge, respectively. The Canoeligans, captained by biology alum Bryan Ellerbrock ’09, won the relay through what they called the “Flintstones method,” wherein they cut a hole in the bottom of their pumpkin and hopped across the Beebe Lake bed.

“We thought that because the other racers were going to end up sinking and using similar strategies, we might as well have started that way from the get-go,” Ellerbrock said.

Asked if they would participate in next year’s Regatta, the Canoeligans unanimously responded “yes.”

Though DelNero thought there was room for improvement in the rules and in the pumpkin cultivation process, he called the event “a dream come true,” citing great turnout and enthusiasm.

“For our first time, it couldn’t have gone any better,” he said.

DelNero hopes to create a lasting and fun Cornell tradition among students, alumni and faculty alike.

“I want to come back when I’m 50 and see people still rowing in pumpkins,” he said.

Check out the Cornell Flotilla Facebook page for updates on next year’s regatta and resources for growing pumpkins, or email DelNero at pfd28@cornell.edu.

Mark Kasvin ’16 is a writer intern for the Cornell Chronicle.