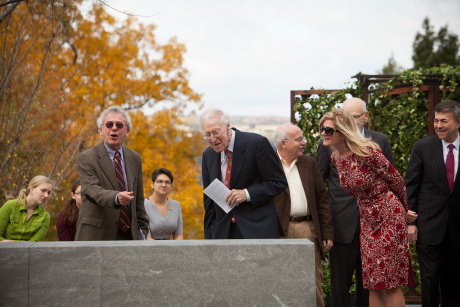 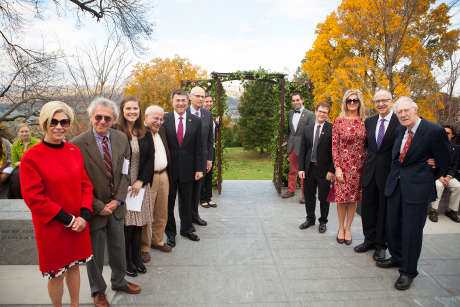 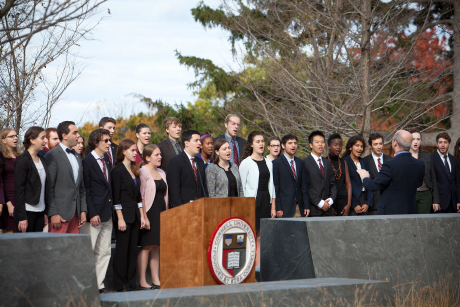 Lindsay France/University Photography
Members of the Glee Club and Cornell Chorus performed renditions of the “Evening Song” and the alma mater at the event.

Sitting on the upper rim of Libe Slope, “far above Cayuga’s waters,” Cornell has a new landmark on campus: The Sesquicentennial Commemorative Grove was formally dedicated today, as part of the Trustee Council Annual Meeting and Homecoming weekend.

The ceremony took place at the fully accessible, 1,700-square-foot area, replete with trees and plantings, a timeline of key events in Cornell’s history engraved into a walkway, and memorable quotes from Cornellians carved onto benches.

“We are here to formally dedicate this newest addition to our beautiful campus – made possible by the commitment and work of many people on and off campus,” said Peter Meinig ’61, chairman emeritus of the board of trustees, who co-chairs the Sesquicentennial Committee with his wife, Nancy Meinig ’62.

“The Sesquicentennial will conclude in 2015, but this grove will be an ongoing reminder to students, faculty, alumni and staff of Cornell’s rich history,” said Nancy Meinig, who co-chaired of the Sesquicentennial Commemorative Grove Committee. She added that the university “began with two very visionary men,” referring to founders Andrew D. White and Ezra Cornell, whose statues on the Arts Quad are physically aligned with the grove.

The idea for a commemorative space was the brainchild of Isaac Kramnick, the Richard J. Schwartz Professor of Government and chair of the Sesquicentennial Commemorative Grove Committee, when he realized that “there is no building, no marker, not even a plaque to be found anywhere on campus to indicate that the university ever had celebrated its 100th birthday in 1965,” he said.

In 2010, Kramnick was part of a small sesquicentennial planning committee, and that committee made a decision to “leave a permanent physical legacy” as part of the 150th anniversary celebration, he said.

The quotes etched in the benches, with room to add more in the future include words from past presidents and such notable faculty members as Carl Becker and Liberty Hyde Bailey. The walkway engravings begin with 1862 and the Morrill Land Grant Act, and end, for now, with a date in the future – 2015 and the Cornell University Sesquicentennial Commemoration.

The New York City firm Weiss/Manfredi, which had designed the Women in Military Service for America Memorial at Arlington National Cemetery, designed the grove.

The landmark was made possible through generous gifts by members of the Cornell University Board of Trustees.

“Many future generations of Cornellians will benefit from this generous birthday present to Cornell,” added Robert Harrison ’76, chairman of the board.

Natalie Rosseau ’16, an undergraduate student member of the Sesquicentennial Committee, spoke of her appreciation of being part of the planning process, and she read an excerpt from Constantine Cavafy’s poem “Ithaka,” adding that she lives on West Campus and has “walked by this grove everyday on my way to class.”