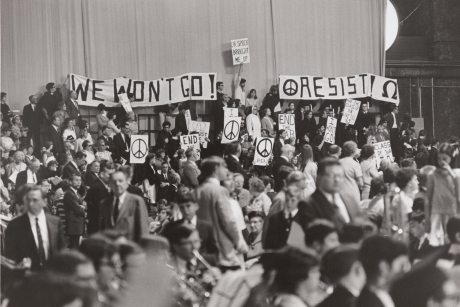 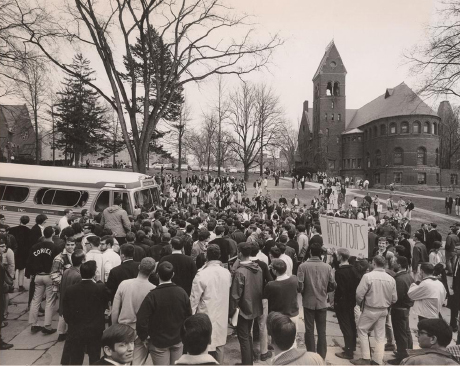 Division of Rare and Manuscript Collections, Cornell University Library
The Society to Oppose Protestors (STOP) blocks vehicles taking demonstrators to the Spring Mobilization to End the War in Vietnam in New York City in April 1967.

In the mid-1960s, Cornell was caught up in the growing resistance to the Vietnam War.

Freshman Bruce Dancis, a participant in the 1963 March on Washington, was primed for activism. Sheila Tobias was a Day Hall administrator who joined anti-war faculty and graduate student activists. David Connor, assistant Catholic chaplain, educated faculty and counseled students trying to avoid the war. African-American Frank Dawson tried to balance his activism with his mother’s fears for his future.

Each worked together to form a group that occupied buildings, held protests, scheduled teach-ins, destroyed draft cards and pushed for civil and women’s rights.

Twenty-five of these alumni, faculty and staff will return to campus Nov. 10-11 for a 50th reunion organized by Isaac Kramnick, the Richard J. Schwartz Professor of Government, as part of the College of Arts and Sciences’ celebration of the university’s sesquicentennial. 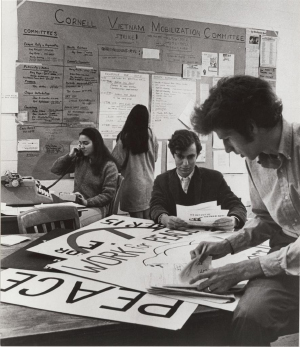 Division of Rare and Manuscript Collections, Cornell University Library
Students who are part of the Cornell Vietnam Mobilization Committee work on signs protesting the war in 1970.

During this era, Dancis ’69 and other students – many of them members of Students for a Democratic Society (SDS) – helped put Ithaca on the map as a center of student opposition to the war.

“I probably helped turn the heat up, but I certainly didn’t start things,” Dancis said. In spring 1966, a student-faculty ad hoc committee on Vietnam formed; busloads of Cornellians and community members attended anti-war rallies in Washington, D.C.; and a May teach-in brought more than 2,000 people to Bailey Hall.

Dancis helped establish a Cornell chapter of SDS and protested the requirement that universities release class rankings to draft boards and administer Selective Service exams that could result in revoked student deferments. On Dec. 14, 1966, Dancis became the first Cornell student to destroy his draft card.

“I felt I couldn’t accept my student deferment,” Dancis said. “I was a middle-class kid who was expected to go to college. … [But] what about all of those kids who weren’t in my situation?” Dancis, a journalist, dropped out of Cornell to lead draft resistance movements in Ithaca and New York City.

Connor ’59 testified in Dancis’ trial and helped students find ways to avoid the draft and get to Canada.

“I was lucky enough to be in a place to do something about it,” Connor said. “Fraternities and faculty would invite me to talk because they didn’t understand the anti-war movement. They couldn’t understand how the greatest country in the world could be as bad as the peace movement and the SDS was portraying it to be.”

Connor mailed his draft card back to his local board. He was immediately called for induction but refused. Charges against him were dropped. He left the priesthood, founded a commune near Ithaca and worked for peace and social justice causes here until 1989, when he moved to Vermont, where he remains involved with peace activism.

An ally in Day Hall

“Vietnam: The War at Cornell,” Nov. 10-11, will include panel discussions, classroom visits by returning ’60s alumni and networking  opportunities for students. Highlights include:

Tobias – hired in 1967 as assistant to the vice president for academic affairs – opposed the war as a faculty member at City College of New York. “Those [students’] lives were in our hands because if they failed our courses they lost their student deferment,” she said. “One year a group of us in the history department gave A’s to all our students as a protest. But of course that only sent more underprivileged students to the war.”

Tobias said a number of Cornell faculty members, especially those in the humanities, provided important leadership to protestors, but many others were opposed.

“I experienced close at hand the passion for ending the war and the resistance to the resisters,” she said. “But we activists took full advantage of Cornell facilities, notably Clark Hall (built with Department of Defense money) to do our Xeroxing.”

After cutting her teeth with the anti-war and civil rights movements, Tobias took on women’s rights, founding a course that led to the Women’s Studies Program at Cornell, one of the first in the nation. She moved into research on undergraduate education in math and science, and has authored numerous books.

Activism on many fronts

“I didn’t consider myself a very political person at that time,” said Frank Dawson ’72, who arrived in Ithaca as a freshman in the fall of 1968 from New York City. “Activism wasn’t even on my radar.”

Dawson became involved in the Afro-American Society and took part in every protest the group staged. “I didn’t want to go to ’Nam and I knew that many of my friends back in the projects were going,” he said.

First-generation college students like him faced the risk of losing a future they’d worked hard to secure if they got arrested or kicked out of school, he said.

Dawson, a media executive turned professor of communication and media studies at Santa Monica College, captured the era in a new documentary, “Agents of Change: Black Students and the Transformation of the American University,” co-produced by Abby Ginzberg ’71, which will be shown during the November event on campus.

What students are doing today

Daniel Marshall ’15, who assisted Kramnick in organizing the project, said his interest in the ’60s began in 2012 when he read “Cornell ’69” by Donald Downs ’71 about the Willard Straight Hall takeover.

He was drawn to the story of “the occupation of Barton Hall by thousands of students and faculty who were acting in support of the Afro-American Society’s demands from within the Straight,” he said. “The occupation turned into a mass democratic assembly, passing resolutions and making decisions about what actions to take.”

The description reminded Marshall of his experience in the Occupy Wall Street movement, and “captured my imagination precisely because they articulated my experience of possibility, solidarity and rupture.”

Kramnick noted, “Most students at Cornell are generally apolitical. Meeting with these ’60s activists will make it clear to them that political commitment is not incompatible with a successful career; that, in fact, it can help shape and ground that career.”