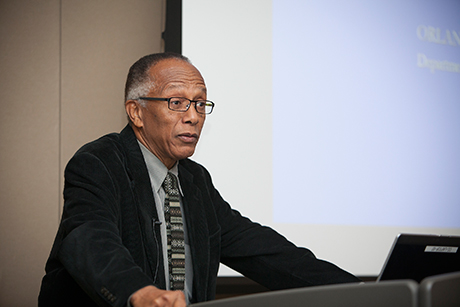 Americans are intensely committed to the idea of personal freedom but decouple it from the democracy designed to protect that freedom, Harvard professor Orlando Patterson said at the Cornell Conference on the Histories of Capitalism on campus Nov. 7.

The American notion of freedom, according to Patterson’s survey research, has become driving off alone in one’s car or – at the behest of then-President George W. Bush, going shopping in reaction to 9/11.

In modern capitalist culture, two mutually reinforcing iron cages controlled by a wealthy few have gained control, Patterson told more than 160 historians and academics from across the nation.

In one cage, he said, borrowing a metaphor from sociologist Max Weber, “bureaucrats are running the (economic) system not on behalf of workers, but in their own interests. Bankers are supposed to be managing, but they diverted the process toward enhancing their own incomes.”

The other cage is ruled by politicians who need a constant infusion of money to ensure their re-elections and spend most of their time pursuing it, rather than serving the people who elected them, he said.

“We’re living in a plutocracy. This is not a real democracy anymore,” said Patterson, a sociologist.

This symbiosis of the economic and political systems has produced “unrelenting inequality and corruption. This is what voters see happening around them. They’re not fooled,” Patterson said.

The 2008 fiscal crisis and continuing fallout can be blamed on growing control of the nation’s political and economic systems by the wealthy, he said.

“It’s amazing these two processes have converged. It is that incredible symbiosis I find frightening,” he said. “I’m hoping it’s not too late.”

Voters have disengaged, as evidenced by falling voter turnout rates, as they see private money swaying elections and, in effect, taking charge of the nation-state.

“Nothing better secures the locks on the twin cages of capitalism” than disenchanted voters dropping out of the political system, he said, adding, “This is what depresses me.”

Quoting philosopher Thomas Paine, he said, “Those who expect to reap the blessings of freedom, must, like men, undergo the fatigues of supporting it.”

“We can have mechanisms to prevent the iron cages from emerging … things can get done … even just a little rise of black Americans voting made a huge difference” in the 2008 presidential race, Patterson said. “Engagement is the essential factor. I can’t think of any other way,” he said, noting that a small number of engaged Tea Party members have effectively influenced many political races.

Most Americans, though, “know their society is rotten … and is not working for them. So, they withdraw from the public sphere, believing their cherished private liberties remain. That is the destiny of our era,” he said.

The inaugural Cornell Conference on the Histories of American Capitalism was organized around five themes: race and ethnicity; built and natural environments; intellectual and cultural history; democracy, state and nation; and gender and sexuality.

Jefferson Cowie, professor of labor history and the ILR School Dean’s Professor Chair, said some people attending the conference considered it a benchmark in shaping the burgeoning field of capitalism history.

In its Nov. 24 edition, The Nation describes the history of capitalism as an upstart discipline centered on a topic, not a methodology, “opening the field to anyone who believes capitalism worth studying.”

“The conference effectively brought together the energy and curiosity of young scholars and the wisdom of senior historians into an extraordinarily rich interplay about the past and future of American capitalism,” Cowie said.

The conference was sponsored by the ILR School with support from the ILR Pierce Memorial Fund, the Scone Foundation, the Cornell Institute for the Social Sciences, the Departments of History, Economics, American Studies, Africana Studies and Government, and the Program in Inequality.

Mary Catt is assistant director of communications at the ILR School.