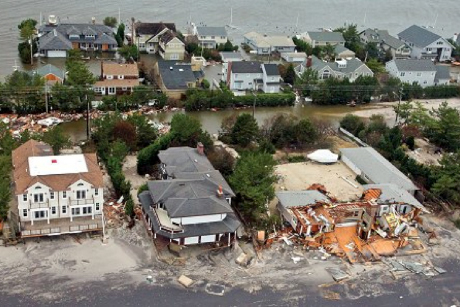 Provided
Cornell researchers have set out to identify factors that may motivate Americans to mobilize for grassroots action on climate change. Local climate change consequences, such as beach erosion, motivate people more than distant one.

Americans are undergoing a significant shift in thinking about climate change, but rising public awareness of a warming climate has not translated into action, according to new survey research.

With support from the Atkinson Center’s Rapid Response Fund, a multidisciplinary team of Cornell researchers set out to identify factors that may motivate Americans to mobilize for grassroots action on climate change. Mobilizing could include voting, serving on boards, contributing money, attending marches or demonstrations, and other forms of political participation and activism.

The researchers led by Shorna Allred, associate professor of natural resources, supplied the Empire State Poll with 19 survey questions. The questions explored relationships among belief in climate change, the respondent’s location and personal experience of climate change effects and willingness to take action against future climate change threats. The annual poll is administered by the Survey Research Institute at Cornell.

“We conducted this research because we think it is vital to understand thresholds for taking action on climate change – essentially, what it would take for people to act politically for climate change,” said Allred. “Climate change is a defining issue of this century, and sustained civil society mobilization is needed to create meaningful political change that results in large-scale climate mitigation and adaptation.”

One reason for the lack of public outcry over climate change may be the gap in understanding its causes. The United Nations issued a stern warning on Nov. 2 about human influence on climate change. While scientists are nearly unanimous in pinning the blame for climate change on human activity, only 58 percent of New Yorkers do.

Allred and her colleagues found that New York residents are significantly more likely to mobilize when they have personally felt the effects of climate change – and many New Yorkers have recently felt those effects, from megastorms to rising food prices. More than 70 percent said that they had experienced the effects of extreme weather or climate change.

In general, local climate change consequences motivate people more than distant ones. Respondents said they would be much more likely to take action if flooding touched their own community, as opposed to devastating other countries like Bangladesh.

One notable exception is action to save endangered species. People are nearly as likely to say they would mobilize for wildlife conservation as they are to fight rising food prices.

Allred and her team took their findings to Albany in late September in a briefing for the Office of the Governor and state executive agencies attended by more than 20 policymakers and staffers. The meeting was facilitated by Patrick Hooker ’84, deputy secretary for food and agriculture, and Basil Seggos, deputy secretary for the environment.

Wendy Wolford, the Atkinson Center for a Sustainable Future’s faculty director of economic development, said: “Many things we take for granted today – like women’s right to vote, diversity in the university and an eight-hour workday – were fought for by ordinary people in protests, demonstrations and social movements …. Over coming years, our group will be able to document not just why people would hypothetically organize, but why they actually did.”