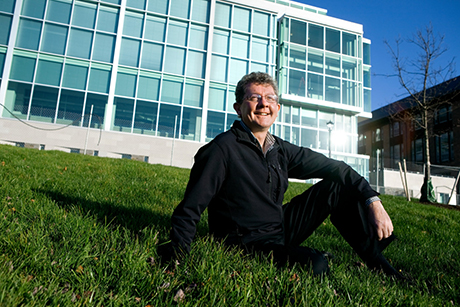 Some of the greatest moments in science may have happened when an experimenter said, “That probably won’t work, but let’s try it.”

J.C. Séamus Davis, the James Gilbert White Distinguished Professor in the Physical Sciences at Cornell, is about to try some new experiments in the uncharted territory of quantum physics, supported by an approximately $2 million, five-year grant from the Gordon and Betty Moore Foundation, which encourages “high-risk” research that could lead to potentially world-changing technological applications.

Davis already has experience working with “quantum materials” that exhibit unusual properties at temperatures near absolute zero and sometimes under high pressure. Using exceptionally sensitive scanning tunneling microscopes (STMs) that can observe electrical activity at the atomic level, he has revealed many secrets of superconductors that carry electrical current without resistance. In earlier work at the University of California, Berkeley, he studied the macroscopic quantum physics of “superfluids” that flow without resistance from the walls of their containers, just like current in a superconductor.

“This grant will give our group the freedom to do things that might otherwise be regarded as too risky in terms of not having a specific discovery or payoff in mind,” Davis said. “If you have ideas about what you are going to discover, you are almost certainly going to be proved wrong.” Christopher Columbus, he noted, thought he was going to China.

Quantum physics deals with the world of elementary particles, where energy comes in predefined amounts, or “quanta.” An electron in an atom can be in positions 1, 2, 3 or 4, but there’s no 1.5, 2.7 or 3.99. Charged particles have a tiny magnetic field, a property physicists call “spin” that can be up or down, but nowhere in between. Interactions between the spins of adjacent particles seem to account for superconductivity.

The Heisenberg uncertainty principle says we can’t measure the exact position and velocity of a particle at the same time, and particles live up to that even when we’re not measuring them. At cryogenic temperatures a particle’s velocity approaches zero so the range of possible positions increases, and particles can in effect teleport from one place to another within that range, a process called “tunneling” that makes some electronic devices work.

Some theorists even suggest that space-time is quantized – and that there may be a Heisenberg uncertainty in that.

One key to understanding how all this works, Davis said, is “visualization” of what’s happening at the atomic level, so he will continue to examine quantum materials with the STM, perhaps with the addition of new apparatus to provide extreme cooling or very strong magnetic fields. In high magnetic fields, he noted, some superconductors transition to a completely new state of matter, and some other materials may do things we haven’t thought possible.

“There are more measurable effects in heaven and Earth than are dreamt of in any ... philosophy,” he said.

He expects to train his instruments on materials that have not been observed this way before, some of which may not even occur naturally. He is collaborating with Darrell Schlom, Cornell’s Herbert Fisk Johnson Professor of Industrial Chemistry, who creates new materials using molecular beam epitaxy, a process that assembles materials by design, one molecule at a time. Kyle Shen, associate professor of physics, will examine the same materials with totally different instruments. The Schlom/Shen collaboration is supported by another Moore Foundation grant.

The Gordon and Betty Moore Foundation supports research that “acquires new knowledge and asks questions not previously possible.” They also support advances in environmental conservation, patient care and some special projects in the San Francisco Bay Area. Davis praised their willingness to support “blue sky” ideas. “We are going into a vast unknown,” he said. “We may find either a desert or a gold mine, hopefully the latter.”