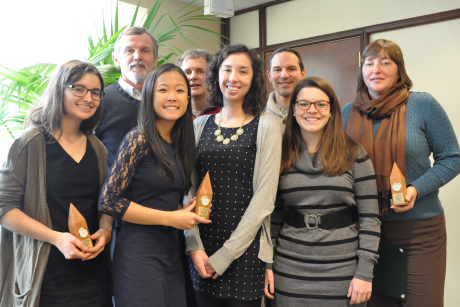 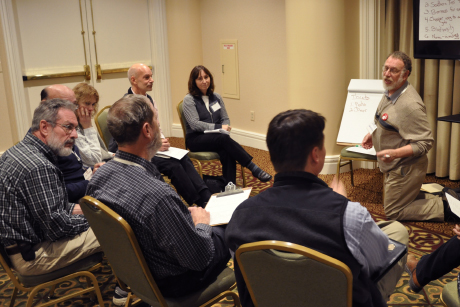 “We’re in for some tough times with climate change,” said Ingraffea, the Dwight C. Baum Professor Emeritus in Engineering, in his keynote address at the fourth Cornell President’s Sustainable Campus Committee annual summit Nov. 18. Addressing the rise in the average global surface temperature, he explained: “We could get to 2 degrees centigrade not 100 years from now, not 50 years from now, but about 30 years from now. So there is an extremely high imperative for us to act.”

In his talk, “Powering New York State With Wind, Water and the Sun to Address Global Warming, Air Pollution and Energy Security,” Ingraffea explained how adding nuclear energy, or burning natural gas and clean coal, are unsustainable bandage solutions. The professor outlined how the state could convert its energy infrastructure – over a 35-year period – into one derived entirely from wind, water and sunlight.

“Nuclear power is too late [to be implemented]. … So then what else if not nuclear, if not natural gas, if not clean coal? What else do we have in New York state?” Ingraffea said. “We have sun, we have water, we have wind, and we have will.”

Why New York state? The state has the eighth-largest economy in the world, featuring several urban and rural environments and sufficient scale for wind energy, and New York City is the most energy-efficient metropolis in the world, he said. Each million dollars spent on wind-energy infrastructure would create 9.5 jobs and for solar, about 9.7 jobs. For fossil fuels energy, like extracting natural gas from shale, only 3.7 jobs are created. Ingraffea said nearly 350,000 jobs would be created over the next 35 years constructing and maintaining the wind, water and solar energy infrastructure.

Also at the summit, KyuJung Whang, vice president for facilities services, reviewed sustainability accomplishments for the past year and gave an update on the campus Climate Neutrality Acceleration Working Group (AWG), which seeks to move Cornell’s climate neutrality target date from 2050 to 2035.

Diane Cohen, executive director of the FingerLakes ReUse Center, provided an in-depth look at how the center operates a community-oriented warehouse, shopping and educational facility where reusing materials helps divert waste from landfills.

Winners of the Cornell University Partners in Sustainability Award also were announced: