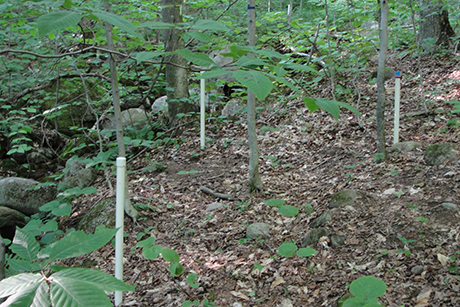 Even during summer dry spells, some patches of soil in forested watersheds remain waterlogged. Researchers have discovered that these patches act as hot spots of microbial activity that remove nitrogen from groundwater and return it to the atmosphere, as reported in a Nov. 3 article in Proceedings of the National Academy of Sciences.

Nitrogen is a critically important nutrient for plant growth in the forest. Denitrification removes this nutrient from the ecosystem and can reduce the growth and productivity of the forest. The research contributes to a better understanding of how and where nitrogen is processed in the environment.

“Nitrogen is the nutrient that most often limits rates of plant growth, yet the cycling and fate of nitrogen in forests has been difficult to track, especially when it is lost in gaseous form,” said co-author Christine Goodale, Cornell associate professor of ecology and evolutionary biology.

“This study will enable us to better understand the fate of nitrogen in forests,” said Sarah Wexler, who led the research while a postdoctoral associate at the Department of Ecology and Evolutionary Biology at Cornell.

The research took place in the Hubbard Brook Experimental Forest in New Hampshire, where the atmosphere deposits five to seven pounds per acre of nitrogen per year. The forest is part of the National Science Foundation’s Long-Term Ecological Research program.

At sites throughout the forest, the research team measured the presence of nitrate, a form of nitrogen that is highly mobile and reactive in the environment, and determined whether the nitrate was a result of atmospheric deposition or nitrification. The researchers showed that some of the nitrate was lost to the atmosphere by looking at nitrate at the atomic level, using naturally occurring stable isotopes.

“The isotopic composition of the nitrogen and oxygen in nitrate provides a natural way to directly track the details of nitrogen cycling. Finding isotopic evidence for denitrification in shallow groundwater in summer, when the groundwater was not draining to the stream, may explain both the reduction in stream nitrogen export and why denitrification has not been seen in the stream itself,” said Wexler.

The researchers determined the importance of denitrification in patches of shallow groundwater, which largely have been overlooked control points for nitrogen loss from temperate forested watersheds. “The importance of these fragmented patches to the nitrogen cycle had not been properly appreciated before this study,” says co-author Kevin McGuire, associate director of the Virginia Water Resources Research Center at Virginia Tech.

Most nitrogen is deposited by rain, and temperate forests receive much larger inputs of nitrogen from the atmosphere than they export to streams. Once nitrogen leaves the forest in a stream, it can become a water pollutant. Denitrification removes this pollutant and can, therefore, improve water quality in downstream lakes and estuaries. “In some ecosystems, there have been long-term declines in stream water export of nitrogen when inputs have remained elevated,” Goodale says.

“Understanding the fate of this nitrogen has been a challenge because denitrification – a gaseous loss of nitrogen to the atmosphere – is notoriously difficult to measure,” says co-author Peter Groffman, an expert on denitrification at the Cary Institute of Ecosystem Studies in Millbrook, New York. “Climate change, especially increases in precipitation, could be increasing the amount of waterlogged patches in the forest. Thus climate change could be increasing denitrification and its effects on forest growth and productivity – a negative outcome – and on water quality – a positive outcome.”