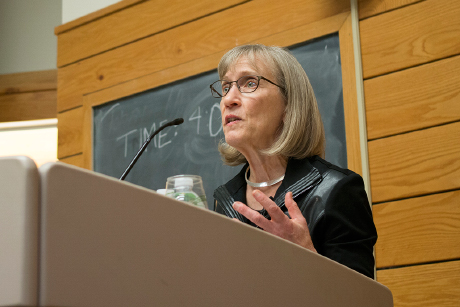 In the last few decades, the percentage of men versus women in the workforce has converged, but gender inequality in wages persists. Claudia Goldin ’67 explained why, and what can be done to achieve equality, at a College of Arts and Sciences sesquicentennial lecture Oct. 24, “A Grand Gender Convergence: Its Last Chapter.”

Goldin explained that economists used to believe the difference in education, college majors and length of time out of the labor market explained the gender pay gap. But, she said, women’s time out of the workforce has decreased and years of education by women has surpassed men. In many professions women are in the majority.

What can be done to eliminate the persistent pay gap?

Nonlinear jobs penalize women for taking time off for family and for working fewer hours. In sectors where temporal flexibility – variation in numbers of hours worked – is not penalized, the gender pay gap decreases.

Whether a position is linear or nonlinear depends time pressure; how often a job requires workers to meet strict deadlines; contact with others; the importance of establishing and maintaining interpersonal relationships; the freedom to make decisions; and whether the work is structured or unstructured.

Using longitudinal and retrospective data, Goldin demonstrated that the gender pay gap increases with age. She showed that the number of hours worked and the length of time since receiving an MBA or J.D. degree explains the gap, which Goldin said can be traced to women shifting into lower-paying positions or leaving the labor force when they have children. Working fewer hours is penalized, said Goldin, and these occupations offer little temporal flexibility.

Eliminating the gender pay gap will require changes in company policies about flexibility. But, said Goldin, it also will require restructuring jobs to offer greater linearity of pay with respect to hours and lower penalties for temporal flexibility and time out. Some employers are already doing this. Bank of America, for example, responded to complaints that its clients had to wait too long for their representatives to be available by shifting from individual bankers to teams of bankers. Some medical specialists also frequently work in teams, allowing them to work fewer hours and have more family time.

Pharmacists are another example of a high-income occupation with a small gender pay gap. Because of the standardization of medications and database technology, it’s very easy for pharmacists to hand off clients. Short, irregular hours are not penalized. Pay increases are linear, based on hours worked, and there is almost no part-time wage penalty.

“The most important thing is that the last chapter is not just about women,” concluded Goldin. “This isn’t only a women’s problem, and this is not a zero-sum game. The changes I’ve described can better just about everyone’s life.”

The lecture was sponsored by the College of Arts and Sciences, the Program on Ethics and Public Life, and the Department of Economics.