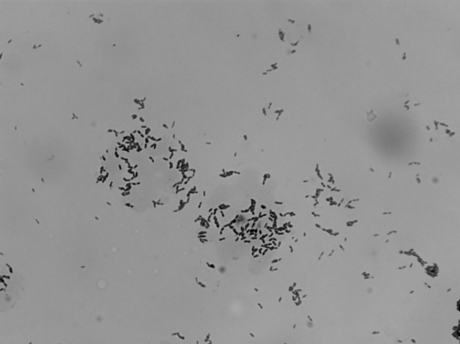 Jillian L. Waters/Ley lab
Microbes in the family Christensenellaceae were found to be the most heritable gut bacteria in a study of twins.

A person’s genes can shape the types of microbes that reside in the human gut independent of the person’s environment, according to a Cornell-led study published Nov. 6 in the journal Cell.

The researchers examined more than 1,000 fecal samples from 416 sets of twins and identified many types of microbes, the amounts of which were influenced by a person’s genetics, with microbes in the family Christensenellaceae being the most heritable.

The study found that people with higher amounts of the gut bacteria Christensenellaceae minuta tended to be leaner, according to body mass index data of the subjects. In experiments, when live C. Minuta were added to germ-free mice without the bacteria, the mice were leaner.

“If you look across the population [of gut bacteria] and explain abundances, there is a host genetic component,” said Ruth Ley, associate professor of microbiology and the paper’s senior author. “Up until now there had been no direct evidence that anything in the human gut is under that kind of [genetic] influence.”

Genetic data that included 171 identical and 245 fraternal twins, whose genomes have been sequenced at King’s College in London and are stored in its “TwinsUK” registry, gave them the power to answer questions and rank which microbes in the human gut are heritable, Ley said.

With twins raised in the same households, “you can assume that environmental influences are going to be very similar to one another,” said Julia Goodrich, a graduate student and National Science Foundation Graduate Research Fellow in Ley’s lab and the paper’s first author. When Goodrich analyzed the microbe populations in the twins’ fecal samples, she found that identical twins, who have the same genetic makeup, had more similar gut microbiotas to each other than did fraternal twins, who share half the same genes.

“What’s happening in our field is there are more diseases where the gut microbiome is altered in diseased versus healthy states,” said Goodrich. The study’s findings create new questions about whether genetics may be selecting for microbiomes that also increase the risk of disease. “The next step is to determine what are the specific genes in the human genome that are driving these microbiomes,” said Goodrich. “Once we understand which genes are underlying, then there might be some useful applications.”

Future studies will also help determine whether therapies that alter abundances of gut bacteria will be effective.

Co-authors include Andrew Clark, Cornell professor of population genetics, and Timothy Spector, a professor of epidemiology at King’s College, among others.

The study was funded by the National Institutes of Health, the Cornell Center for Comparative Population Genomics, the Wellcome Trust and the European Community’s Seventh Framework Programme.

Study of twins will explore links among genes, gut bacteria