Explaining how Iceland tapped into the Earth for geothermal energy and captured water resources to develop renewable electricity, Ólafur Ragnar Grímsson, president of Iceland, told a Cornell audience how his country remade itself from one of Europe’s poorest into a nation that is financially and environmentally secure. 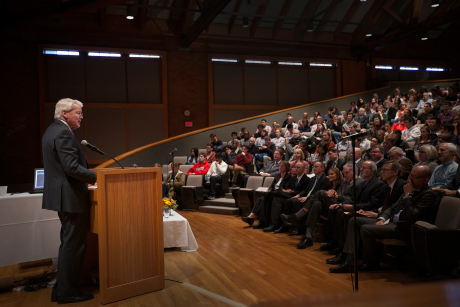 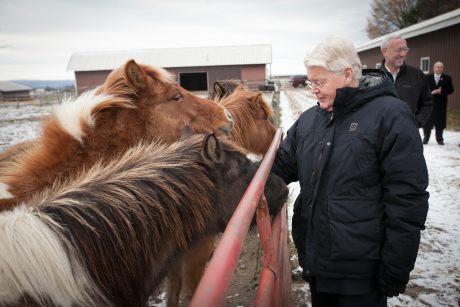 Like a seasoned professor, Grímsson used more than three dozen slides to illustrate how fossil fuel and coal once dominated Iceland’s energy profile in the mid-20th Century. Grímsson showed an image of the Reykjavíkshrouded in black smog, thanks to the burning coal. “You could smell the energy every day,” he quipped. Grímsson contrasted that image with a picture of today’s Reykjavík, a thriving, clean city with ample energy.

Today, all of Iceland’s electric power is generated by hydropower and geothermal energy, and about 95 percent of the nation’s heating demand are warmed by geothermal means, which includes homes, commercial, governmental and industrial buildings. The country is the biggest green energy producer per capita in the world.

Market forces drove out fossil fuel and coal, and geothermal and hydro energy replaced it. “This was done not on the basis of a grand plan; not on the basis of a visionary government policy from 30 or 40 years ago,” Grímsson said. “It has been done through localized, profit-driven initiatives and actions taken by small towns, communities, different sectors, companies and so on. The end result is an extraordinary transformation.”

Beyond Iceland, Grímsson spoke about the need to address climate change around the world. He pointed to the U.S.-China climate agreement reached in mid-November, which calls for deep cuts in climate pollution, as a “historic decision, a declaration, almost anathema in international [politics].”

To slow the pace of global climate change, countries must agree one-on-one with each other, attend international conferences and forge agreements, or follow Iceland’s example, Grímsson said. “We only have 20 or 30 years to take action.”

Cornellians were taken by Grímsson’s warmth and candor. “President Grímsson gave us a unique view of Iceland’s playbook for successfully developing a clean energy economy in less than 50 years. His lecture was both inspirational and motivating as he described Iceland’s extraordinary reshaping … to a renewable energy supply using its indigenous geothermal and hydro resources,” said Jeff Tester ’66, M.S. ’67, the Croll Professor of Sustainable Energy Systems in the School of Chemical and Biomolecular Engineering and director of the Cornell Energy Institute, who has known Grímsson for about 10 years and is working with Icelandic researchers on geothermal research.

“Iceland succeeded because of its long-term vision and commitment where a team of talented geologists, engineers, biologists, doctors and business people worked together in a very creative and entrepreneurial fashion,” said Tester. “This is just the recipe that Cornell, the United States, and the rest of the world needs to achieve their own transformation to a sustainable energy future.”

Grímsson’s visit was sponsored by the Einaudi Center, the Cornell Energy Institute, the Atkinson Center for a Sustainable Future and the Office of the Vice Provost for International Affairs.