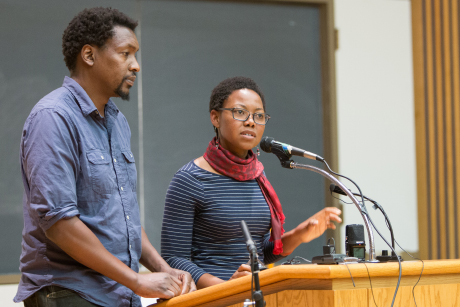 For NoViolet Bulawayo, MFA ’10, it’s impossible to separate her storytelling from real life.

Her latest work, “We Need New Names,” takes place in her home country of Zimbabwe, and another current project focuses on AIDS, which has claimed the lives of two of her siblings.

“I’m a socially engaged writer,” said the author, now a lecturer in fiction at Stanford University. “In Zimbabwe, often our writers are using their art to speak to social issues. I’m following that tradition.”

Bulawayo was on campus Oct. 23 for a reading with assistant professor Mukoma Wa Ngugi. “We Need New Names,” published in 2013, won the PEN/Hemingway Award and was shortlisted for the Man Booker Prize, the first time for a Zimbabwean author.

The book tells the story of 10-year-old Darling, who grows up amid the chaos of the Mugabe regime in Zimbabwe, then escapes to suburban America.

Bulawayo said she “met Darling” while she was studying at Cornell.

“The novel was born out of my very first workshop,” she said. Both Helena María Viramontes, professor of creative writing, and her classmates said they wanted more. “Helena said ‘you know you have a novel here.’”

“Then I went back to my apartment, and Darling and her friends just came to me,” Bulawayo said of her writing process. “I had a lot of fun with it. Since the story comes from such a dark period of Zimbabwe’s history, I needed the humor that Darling’s voice accorded me to be able to pull it off.”

Though Darling is only 10, her voice came naturally to Bulawayo. “I was writing about a country that I had experienced as a child,” she said. Bulawayo moved to the U.S. to study when she was 18.

After she left Zimbabwe, Bulawayo said it was difficult “seeing my country come undone, especially with the human rights violations of 2008 and 2009.”

“Fiction allows you to talk about things that are hard to talk about,” she said. “The project became a form of catharsis for me.”

The book’s success led Bulawayo on a book tour, something she said wasn’t exactly her cup of tea: “I‘m a person who really just wants to write.”

In that way, Cornell’s MFA program, which features small classes and intensive workshops with faculty, was the perfect choice for her, she said.

“What was emphasized was just working on your writing and growing your craft,” she said. “Before classes even started, I remember meeting (Professor) Maureen McCoy and she said, ‘So, what are you working on?’ and I realized I’d come to Cornell with no concrete idea of what I wanted to write. I soon learned to work seriously both inside and outside of workshop.”

She became part of a community of students who cared deeply about each other’s work, she said.

“I can’t speak highly enough of my experience in the Cornell MFA program,” she said. Professors, including Viramontes and Ernesto Quiñonez, encouraged Bulawayo to explore herself to discover the themes in her writing.

“Being pushed and having myself challenged in that way made me think seriously about my work and who I was on the page,” she said.

That process led her to discover Darling and continues to guide her new project, a short story collection about the AIDS epidemic. And perhaps more time spent with Darling.

“I think I’ll go back and write a sequel one day,” she said. “My young readers have said, ‘That book isn’t done. We need to know that happened to Darling.’”