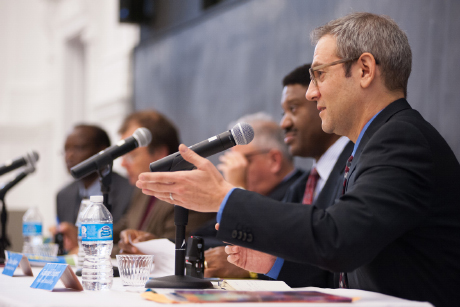 Riley Yuan/University Photography
Nathaniel Hupert, a disease and disaster-preparedness expert and associate professor of health care policy and research at Weill Cornell Medical College, speaks at a Nov. 10 panel on the Ebola pandemic. 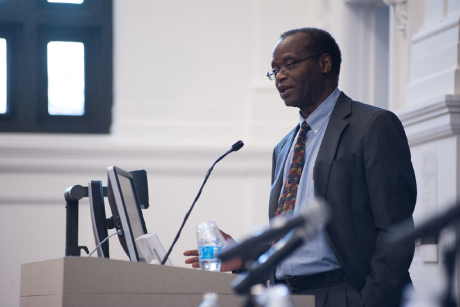 At an international roundtable on the impacts of Ebola on Africa held Nov. 10 in Warren Hall, public health, policy, government and trade experts discussed concerns about an overtaxed public health infrastructure in West Africa.

The roundtable, “Social, Economic and Political Impact of the Ebola Pandemic,” was organized by the Institute for African Development (IAD) and the Mario Einaudi Center for International Studies at Cornell, and moderated by IAD Director Muna Ndulo, professor of law.

The Ebola virus was first identified in 1976 in Zaire in a series of epidemics that “claimed a total of 300 lives and were contained rather quickly,” Ndulo said. “Today’s crisis is of a different order, [affecting] three countries with a total population of 20.5 million.”

Containing the epidemic is a priority, but “it is an epidemic of ignorance that is the problem,” Ndulo observed. “And that affects everything – jobs, food production, people keeping away from fields and markets.”

The virus struck in the West African nations of Sierra Leone, Liberia and Guinea last spring. Congested urban centers and slums have been hardest hit, especially in Liberia, said Chinua Akukwe, a professor of global, preventive and community health at George Washington University.

Showing figures from the World Health Organization (WHO) – 13,042 confirmed cases of Ebola and 4,808 deaths in the affected areas of Africa – Akukwe cautioned, “those are only about a third of actual cases.”

Compounding the rise in confirmed cases, he said: “Citizens did not respond to or believe the initial reports” of the virus. All of the modern cases in West Africa, he said, are linked to the funeral of an infected traditional healer in Sierra Leone.

The WHO declared an international public health emergency Aug. 8, and “there are signs that the epidemic is beginning to slow down” in the number of new cases being reported in Liberia and Guinea, Akukwe said. The situation is not as dire outside of West Africa; there are few Ebola cases elsewhere on the continent.

Combating the disease has imposed a financial burden on the affected countries, said economist John Panzer of the World Bank’s International Trade Department. They lack basic infrastructure and at the time of the outbreak were just beginning to thrive following years of civil war in the region.

“This crisis occurred in the very countries that are the least prepared to deal with it,” Panzer said, later adding that their economies “are starting to stabilize.”

In addition to losses in agricultural trade and service industries, and in the number of foreign workers, he said, “these governments have faced enormous demands and pressures and need to increase expenditures – not only on health, but in security and quarantine and hazard pay for health workers.”

Cornell professor of government Nicolas van de Walle said: “There have been very clear efforts in the name of public health in these countries over the past 20 years. There is no doubt that countries are usually better served if they do things on their own [rather than rely solely on aid], and if there’s a will to solve problems in public health,” including training more doctors.

Panzer cited economic projections from early October. “At that time we were expecting the fiscal impact [of Ebola] in these countries would be about 5 percent of GDP … as large as all the foreign aid coming to these countries.”

Dr. Nathaniel Hupert, a disease and disaster preparedness expert and associate professor of health care policy and research at Weill Cornell Medical College, cited recent U.S. Centers for Disease Control projections for Liberia and Sierra Leone. “The maximum number of cases could be 1.4 million [correcting for underreporting on an estimated 550,000 confirmed cases] by January, or, if we could contain 70 percent of the cases, we’d have a different picture.”

Hupert has been working since 2008 to help the U.S. government interpret statistical scenarios, or “what the mathematical modeling community is saying on infectious diseases,” such as large-scale projections on the 2011 global influenza epidemic. The modelers have some challenges with Ebola, he said.

“It’s very difficult to get a lot of data out of these three countries,” he said. “What we’re faced with is a very complex situation where the [results of] decisions that are made on data from today is not known until months later.”

Hupert said large treatment centers were hurriedly built near Monrovia, Liberia; and another 15 facilities are under construction in the region. “Eventually, the Ebola outbreak will go away,” he said.

Ebola readiness on campus and in the region