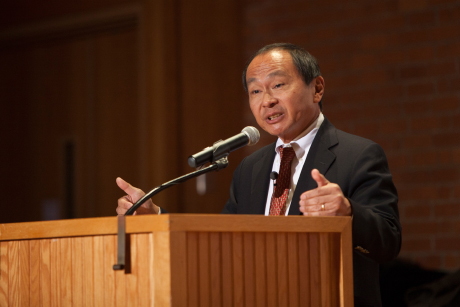 Fukuyama was joined at the “Will Democracy Have Competitors in the 21st Century?” panel by John Mearsheimer, M.A. ’78, Ph.D. ’80 (University of Chicago) and Peter Katzenstein, the W.S. Carpenter Jr. Professor of International Studies. Isabel Hull, the John Stambaugh Professor of History, served as moderator.

Gretchen Ritter, the Harold Tanner Dean of the College of Arts and Sciences, noted in her introduction that the questions Fukuyama raised in his essay are as real today as when he first asked them in 1989, a point driven home by the lively disagreements between panelists during the Q&A.

Fukuyama said that when he arrived at Cornell in the fall of 1970, about 25 percent of governments were electoral democracies. In 2014, there are 115-120 electoral democracies, about two-thirds of the world. But at the same time, aggregate freedom scores have been dropping.

A modernized democracy can regress, Fukuyama said, because of intellectual rigidity or when elites use their positions to gain political power to reinforce those positions. “We’re seeing a lot of signs in the U.S. of the re-patrimonization of the government from the rise of well-funded, well-organized interest groups,” he noted. “There’s a tremendous amount of institutional inertia that makes it extremely difficult to reform the system.”

But while Fukuyama contended that there are no good alternative models of government to democracy, the other panelists disagreed.

“Authoritarian regimes come in many flavors, and some are reasonably attractive,” said Mearsheimer. “If you contrast China and India, which is operating more efficiently? China’s autocracy looks better.”

Mearsheimer also took issue with Fukuyama’s contention that the end of history will have no disagreements of any consequence. “Liberal democracies are often war-like,” Mearsheimer said. “The U.S. has been at war for two out of every three years since the Cold War ended. [Fukuyama’s] perspective is inconsistent with liberalism and with human nature because it assumes we can use our own reasoning to achieve agreement. It has never been the case, and it won’t be in the future, so therefore we will never reach the end of history.”

Katzenstein, too, took issue with the “political entropy” of Fukuyama’s vision. “[Fukuyama’s] lecture focuses on institutions understood as stable, recurrent patterns of behavior,” he said. “Liberal democracy is a specific array of institutions, but institutions are always imperfect instruments of the power it takes to control them. That power has a twin that circles around and undermines institutions and thus creates innovations, new questions and new answers in politics. The political tensions and contradictions between different traditions are the defining criteria of a liberal political community, for it is disagreements – not agreements – that define and constitute political communities.”

Fukuyama challenged Katzenstein, asking at what point these modernities become basic organizing principles in society. “I think a lot of these differences over time will disappear because they’re not viable or because they’re simply varieties [on the theme],” he said. Katzenstein responded that Fukuyama’s deeply held belief in modernization theory and the ultimate convergence of all societies on liberal democracy was indeed fundamentally different from a theory of different pasts providing different polities with different ways of responding to modernity.

The sesquicentennial event was co-sponsored by the College of Arts and Sciences and the Mario Einaudi Center for International Studies.