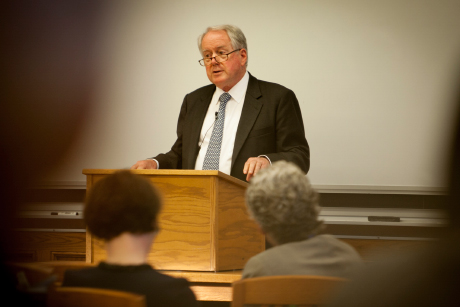 Jason Koski/University Photography
Judge William A. Fletcher of the U.S. Court of Appeals for the 9th Circuit talks about the flaws of the death penalty at Nov. 4 lecture at the Cornell Law School.

The death penalty may not discourage criminals from committing murder and is very expensive, said William A. Fletcher, a judge of the U.S. Court of Appeals for the 9th Circuit, on Nov. 4 at Cornell Law School.

“It has now been almost 40 years since the court’s decision in Greg v. Georgia,” said Fletcher about the case that struck down mandatory executions for certain types of murders. Despite this, the U.S. remains the “only industrialized Western country that still has the death penalty.”

Fletcher said many European nations abolished capital punishment “even in the face of poll numbers … that favored the death penalty,” leaving only the United States, Japan and China among industrialized nations to retain the death penalty.

He also took issue with the “extremely slow” application of the death penalty. In some states, he said, “many more death row prisoners die from natural causes or from suicide than from execution,” and a death sentence amounts to life in prison without parole.

Additionally, Fletcher argued, “certain methods of execution are or may be unconstitutional.” He said the electric chair, “once thought more humane than hanging, has now be held unconstitutional” and “there is currently a moratorium in California because of concerns about lethal injection.”

Drawing on his experience, Fletcher then turned to a number of cases involving errors in the application of the death penalty. These cases involved alleged police mistreatment and planting of evidence, malpractice on the part of attorneys, corporate influence over judges’ behavior and clemency pleas effectively becoming “a useless exercise.”

On “the ladder from the police to the prosecutors to the courts to the governors, at every rung we have seen the problems that I have described.” Such problems “don’t occur in every case, but they occur in enough cases that we have a serious problem.”

Fletcher said his hope is that, if not in his lifetime, then soon after, “perhaps we, as a country, will eventually have seen enough.”