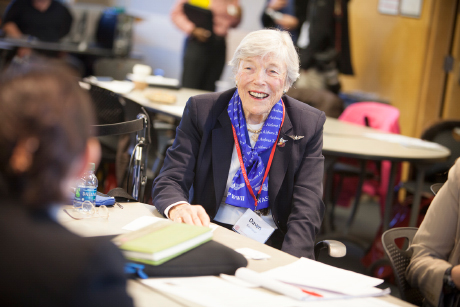 Lindsay France/University Photography
Dawn Seymour ’39, a member of the Women Airforce Service Pilots during World War II, participates in a presentation and discussion on the best practices and challenges in the recruitment and retention of women veterans in King-Shaw Hall Nov. 3.

For Dawn Seymour ’39, her first flight in a yellow Piper Cub with Richard Parmenter ’17, a Cornell research associate and later university coordinator of research, 75 years ago changed her life.

“He took me up on a glorious October day,” she recalled, seeing “the world below as whole, without boundaries and boundless horizons.”

Speaking at a panel discussion on women veterans transitioning into the workforce Nov. 3 at Cornell’s King-Shaw Hall, Seymour recounted her experiences as a member of the Women Airforce Service Pilots (WASP) during World War II. She learned to fly B-17s and then, when stationed in Florida, flew student gunnery missions. But, before the war was over, she and the other WASP received letters saying that they were no longer needed and were being sent home. “We turned in our parachutes, packed our cars and left,” she recalled.

“It was a funny place to be,” she said. The WASP had worn uniforms, and 38 of them had died in duty, but because they were considered volunteers, not soldiers, they received none of the benefits or recognition afforded male veterans.

Only in 1977 were the WASP finally recognized by Congress, and in 2010 they were awarded the Congressional Gold Medal.

Though perhaps not as dramatic as Seymour’s return to civilian life, women veterans today returning from the wars in the Middle East often feel a similar sense of dismissal and invisibility, panel speakers said. Their discussion explored the obstacles facing women veterans transitioning to civilian life and re-entering the workforce, and the ways in which employers can modify their work procedures and cultures to better welcome all veterans, and especially women veterans.

In some cases, the invisibility and devaluing begins before a woman chooses the military, said Brian Leidy, senior extension associate for Cornell’s Bronfenbrenner Center for Translational Research. Many choose the military to escape an abusive or unhealthy home situation, and then experience sexual abuse once enlisted. Feeling betrayed and victimized, these women are reluctant to report the abuse, he said. Later, the trauma of sexual abuse combined with combat trauma leads to high rates of depression, substance and domestic abuse among women veterans, he said.

Returning women veterans often struggle to balance their need for employment with their parenting responsibilities: They are three times more likely to be a single parent than their male counterparts, and many are under age 25 with children under age 5. Jordanna Mallach, special programs and outreach coordinator with the New York State Division of Veterans’ Affairs, noted that 7.4 percent of all New York state veterans are women, but 24 percent of homeless veterans are women.

All panelists agreed that transitioning women veterans need to avail themselves of networks, career advisors and such support systems as the U.S. Department of Veterans Affairs. Employers can improve their recruitment and retention of veterans if they provide support for the veterans they hire – men and women – through policies that promote work/life balance, employee assistance programs, supervisory training and networking groups.

Even such simple measures as documenting standard operating procedures help veterans, said Captain Mary McAdams, as the culture of the military is structured and hierarchical, with checklists and clear-cut chains of command.

The greatest challenges for veterans in finding a job have been the national recession and the ability to translate their military skills into civilian terms, said Kenneth Matos, MIL ’04, senior director of research at Families and Work Institute. Recruiters need to be connected with military talent pools and military and civilian culture gaps bridged, he said.

Maureen Casey, who leads JPMorgan Chase’s Office of Military and Veterans Affairs, recommends that employers increase awareness in their organizations of veterans and military personnel by bringing in military speakers, recognizing military accomplishments, and including military staff members in their speeches and letters.

Veterans can also help promote this awareness, McAdams said. Instead of hiding the fact that you are a veteran, learn how to highlight the skills your military experience has given you, she said. “Don’t devalue your military profession: Everything you’ve learned is valuable.”