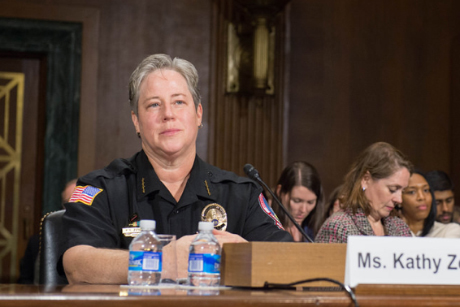 “Attitudes and perceptions about sex, healthy relationships and gender roles solidify long before young people reach college age,” Zoner emphasized. “The earlier we can begin education around respect and civility across gender lines at a more meaningful and impactful time, the better chance we have to make the sweeping cultural changes necessary to get at the root of this problem.”

Last summer, a group of senators led by Claire McCaskill (D-Mo.) and Kirsten Gillibrand (D-N.Y.) introduced a bill called the Campus Accountability and Safety Act. The bill would amend the Higher Education Act of 1965 and the Clery Act to establish better resources for victims, training for campus personnel, new reporting requirements, school accountability and coordination with law enforcement, and stiffer penalties for Clery Act violations.

McCaskill and Gillibrand, who are not members of the Judiciary Committee, appeared as witnesses at the hearing to build support for their legislation among their colleagues.

Zoner noted that senators are concerned about the lack of resources at the Department of Justice and the Department of Education for enforcement and oversight of Title IX and the Clery Act. “Efforts to beef up enforcement – including increased fines for noncompliance – should be coupled with incentives for higher education institutions for training, education, programming around prevention, law enforcement and administrative investigators, and research,” she said.

Testifying that resources to support training for “trauma-informed” sexual assault investigations will benefit campus adjudicators and local law enforcement, Zoner said that the revenue raised through increased fines – levied upon colleges and universities for lapses in investigations – should be funneled back into these incentive programs.

Zoner expressed concern about the proposed Senate bill’s inflexibility relating to the fines schools would face for improper Clery reporting.

“The bill does not differentiate between willful, knowing and intentional conduct, but rather gives the Department [of Education] great discretion to assess a penalty of up to 1 percent of an institution’s operating budget,” Zoner said. “The bill also allows the Department [of Education] to keep the fines it collects, creating a perverse incentive for overenforcement. I strongly recommend that these provisions be revised to put the penalties in line with other civil rights laws, to [differentiate] between willful and inadvertent violations, and to direct the fines to research and training.”

Last June, Zoner participated in a roundtable forum on “Campus Sexual Assault: The Administrative Process and the Criminal Justice System,” which helped inform the McCaskill-Gillibrand bill.

After the hearing, Zoner met with the legislative staffs of senators and members of the House of Representatives who have expressed interest in addressing campus sexual assault, including Rep. Carolyn Maloney (D-N.Y.), a lead sponsor of the Campus Accountability and Safety Act bill in the House.