"Cornell Rewind” is a series of columns in the Cornell Chronicle to celebrate the university’s sesquicentennial through December 2015. This column will explore the little-known legends and lore, the mythos and memories that devise Cornell’s history. 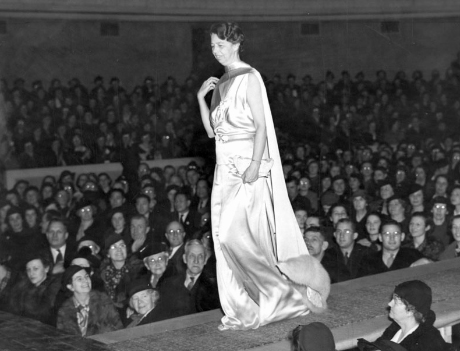 Cornell University Library Rare and Manuscript Collection
Eleanor Roosevelt models a presidential inauguration gown at Bailey Hall, during her 1937 visit to Cornell's Farm and Home Week. The gown remains in Cornell's collection, and it is currently on display on the ground floor of the Human Ecology Building.

Many people have contributed to Cornell University’s rich history, but one key contributor was never a student, alumna or professor. In today’s College of Human Ecology, research in nutrition and health, design and technology, human development, and public policy can be traced back to the influence of Eleanor Roosevelt.

The roots of the College of Human Ecology date back more than a century, when it began as a department in the College of Agriculture. In 1919, Cornell’s trustees made it the School of Home Economics.

Martha Van Rensselaer and Flora Rose, the school’s co-directors, were well-known throughout the state and were close friends with Roosevelt, sharing a passion for social issues. The National American Woman Suffrage Association had bestowed honor roll status on Van Rensselaer in 1920, months before the ratification of the 19th Amendment giving women the right to vote. In 1923, the national League of Women Voters named Van Rensselaer, along with Cornell’s Anna Botsford Comstock and M. Carey Thomas, Class of 1877, three of America’s 12 most influential women. 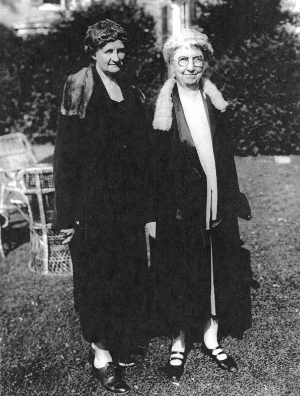 Cornell University Library Rare and Manuscript Collection
Flora Rose, left, and Martha Van Rennselaer pose on the lawn of the home of Eleanor and Franklin Roosevelt in Hyde Park, New York, while attending a League of Women Voters meeting.

Van Rensselaer and Rose had long sought to have the School of Home Economics become a college, and a bill was introduced in the New York Legislature in 1924 and passed in early 1925. Van Rensselaer was not shy to ask her friend Eleanor for help. Eleanor wired Gov. Alfred E. Smith, urging him to sign the bill – and he did.

In her role as first lady of New York (Franklin Roosevelt was elected governor in 1928), Eleanor Roosevelt was interested in home economics as a way to advance women.

The College of Home Economics expanded rapidly and needed a new home. The Legislature approved $1 million to build the college’s new building (the original part of Martha Van Rensselaer Hall) on campus. In Depression era New York, $1 million seemed a breathtaking sum. Flora Rose once said: “We always felt that this building, in which we are now, was really the influence of Eleanor Roosevelt on her husband ... Gov. Roosevelt only appropriated half a million dollars for it to begin with, and one night … Eleanor said to Franklin, ‘Franklin, why don't you give Martha all the money she asked for, the million dollars?’ And Franklin said, ‘Why, Eleanor, you know Martha can't use all of that right away. I'll give her the rest in time to complete the building.’” He did as promised.

Milkorno … and the White House

Home economics captured more than cooking, baking and sewing. At the turn of the 20th century, it could mean scientific research in sanitation; innovations in product and housing design; and new scientific ideas about child development. Cornell also taught its home economics students about household management and, through extension, disseminated these scientific principles and strategies to rural women. 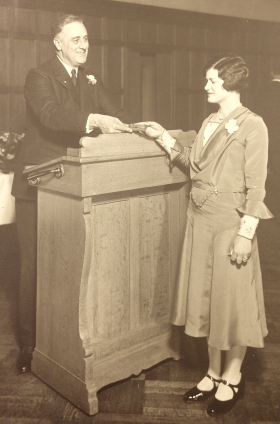 From 1908 to 1959, the university hosted an annual “Farm and Home Week,” where farmers and homemakers could “hear and discuss the latest information and practices applicable to their problems.” From 1928 until 1940, Eleanor Roosevelt attended the week’s events and always gave the keynote speech to a packed Bailey Hall. Her topics were wide-ranging, political and personal – from “Women’s Civic Responsibilities” (1932) to “What Is Today’s Challenge to Women” (1936) to “What Goes on Inside the White House” (1940). The talks were often broadcast by WESG, the campus radio station.

At the 1934 Farm and Home Week, the new Martha Van Rensselaer Hall was dedicated. “[The new building] is a fitting tribute to the work of a courageous and far-seeing woman, and not only does the building itself thrill me, but what it stands for and the service it will be able to render,” said the first lady. “We need to know more about how to live to the best advantage, how to use what we have and to know what to strive for.”

In 1936, she took advantage of her Farm and Home Week visit to become the first guest speaker for a newly formed Cornell Democratic Club. Speaking to a full house in the Myron Taylor Moot Court Room, she encouraged the audience to become interested in political activity.

In 1937, Roosevelt brought her inaugural ball gowns and modeled them at a packed Bailey Hall. “Darling … I've just been on my annual pilgrimage to Cornell and besides my speech this year I took up my inauguration dresses at the request of the Student Council and modeled them in the fashion show,” Roosevelt wrote to her daughter, Anna, in February 1937. “I’ve decided I can earn my living that way some day if necessary.” 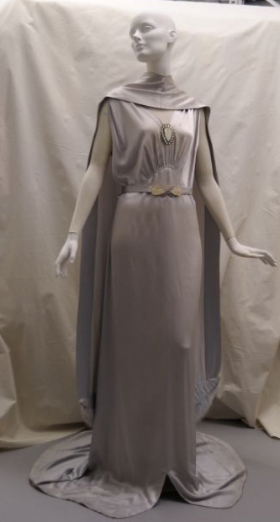 Eleanor Roosevelt also came to Ithaca in 1938 to dedicate the Southside Community Center; the building had been built in part by the New Deal WPA as a community resource for Ithaca’s African-American citizens.

Although her last Farm and Home Week speech came in 1940, she returned to Cornell in 1950 to speak at a two-day conference organized by Watermargin, a cooperative living residence Cornell students had established in 1947 to promote understanding between people of different races, religions and nationalities. As she wrote in her “My Day” newspaper column: “Of course, it was because of their desire to hear about the work of the United Nations Human Rights Commission that I had been asked to close the conference, and Bailey Hall, in which I have talked so often during Farm and Home Week, was filled with young people. … It seems to me very encouraging that these young people should take such an interest in human rights and freedoms.”

In 1955, Watermargin again invited her to speak at Model United Nations Week. She also gave a press conference for representatives of The Cornell Daily Sun, The Ithaca Journal and even the Ithaca High School Tattler, talking about international and national issues ranging from the admission of Communist China to the United Nations, the situation in the Middle East, U.S. support for a strike in South Africa, American support for the U.N., racial integration, federal aid to education, and her support of Adlai Stevenson for president.

For almost 30 years, Eleanor Roosevelt clearly felt a personal connection to Cornell, and especially to the social reform agenda of the College of Home Economics. Her relationship with Martha Van Rensselaer and Flora Rose benefited the college and the university. And all of her trips to Ithaca gave her the opportunity to show her support of young people, women and minorities, and to encourage their participation in politics, civic activities and international affairs.