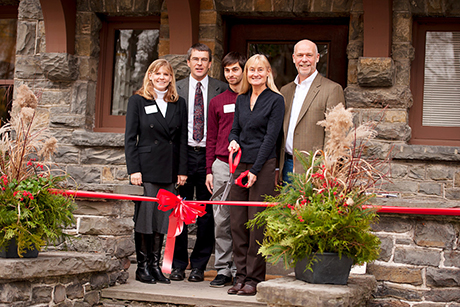 Owning a home free and clear is a great feeling, and the leaders of Chesterton House are now well on their way to full ownership of the Christian study and living center at 115 The Knoll, just off North Campus.

Recently Greg and Susan ’81 Gianforte made a generous gift that allowed Chesterton House to purchase, rather than rent, the English Tudor residence for men. With lower monthly payments, Chesterton House – a center for Christian studies established in 2000 – will have stability as well as more resources for its other programs, including a speaker series and courses in biblical studies that are open to the Cornell community.

“We think it makes the campus more robust by providing a permanent home for distinctively Christian community on campus. In addition, the ownership of the house provides revenue for Chesterton House to facilitate discussion centered on Christian scholarship in the Cornell community,” Susan Gianforte said at a Nov. 15 dedication ceremony.

The Gianfortes also plan to provide financial support to Sophia House, the women’s community that operates under the umbrella of Chesterton House, so that it, too, can have a permanent home. Currently it has no facility.

Rev. Kenneth Clarke, senior director of Cornell United Religious Work, said: “Chesterton House, in concept and practice, is where spirit and intellect meet. The Gianfortes’ gift ensures there will be a physical space for this nexus to occur, through exploration of sacred text, the role of religion and public life and the arts as a medium of truth.”

Diane Lebo Wallace is a writer for Student and Academic Services.