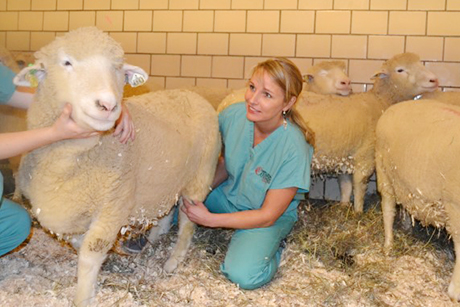 Meg Goodale
Lisa Fortier checks the meniscus of a sheep that she operated on last summer, using a groundbreaking new procedure to regenerate knee meniscus.

Researchers report on a revolutionary new procedure that uses 3-D printing and the body’s stem cells to regenerate knee meniscus, a tissue lining that acts as a natural cushion between the femur and tibia.

People with damaged menisci develop arthritis and are forced to limit their activity.

The procedure, published online Dec. 10 in the journal Science Translational Medicine, has proved successful in sheep at Cornell University six months after surgery, though the researchers will monitor the sheep for a year to ensure the animals do not develop arthritis. Sheep menisci are structurally similar to those of humans, and clinical trials in humans could begin in two to three years.

“Most middle-aged people who end up with a degenerate meniscus have it trimmed up [surgically], but if you lose more than 20 to 30 percent, then you are very prone to arthritis,” said Lisa Fortier, professor of large animal surgery at Cornell’s College of Veterinary Medicine and a co-author of the paper; she led the meniscus surgeries on sheep. “If everybody who needed it could replace their meniscus they could slow arthritis and maintain their full function,” Fortier added.

The technique was developed by the paper’s senior author Jeremy Mao, professor of dental medicine at Columbia University Medical Center, and involves taking an MRI of the patient’s (in this case sheep’s) knee. Using a 3-D printer, Mao printed a biodegradable polyester scaffold in the exact shape of a patient’s meniscus. Through multiple lab experiments, Mao’s group discovered that two growth factors, when used in specific concentrations and at critical times, recruited the most stem cells for meniscal repair. The growth factors were then laced into the scaffold, allowing the body’s stem cells build a new meniscus four to six weeks after surgery.

Currently, a torn meniscus requires replacement with cadaver tissue, which has a low success rate and can lead to disease and rejection, and synthetic menisci have proved ineffective and hard to fit properly in diversely built patients.

Approximately a million people undergo meniscus surgeries each year in the United States.

The study was funded by the National Institutes of Health, the Arthroscopy Association of North America, the American Orthopaedic Society for Sports Medicine and the Harry M. Zweig Foundation.