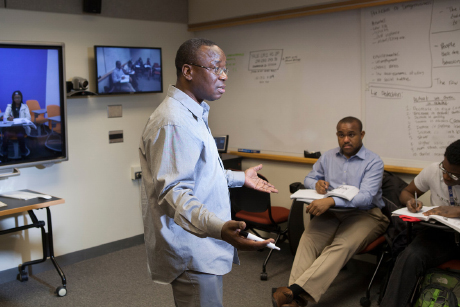 Students interested in language study have two new options to choose from – Wolof and Zulu – and starting in fall of 2015, they may have three more: Punjabi, Ukrainian and Hungarian.

Those languages join 52 ancient and modern languages offered at Cornell, some through traditional courses and others through the Shared Course Initiative, a collaboration with Yale and Columbia universities, where students can join classes at any of the three campuses via live videoconferences. All language classes are offered through the College of Arts and Sciences.

The Shared Course Initiative, begun in 2012 through a $1.2 million Mellon Foundation grant to the three schools, was recently awarded another $1.2 million grant for three years through the foundation to help increase the number of languages offered and excite student interest in language study.

Máté Rigó, a doctoral student in the field of history, took Romanian through the program to help with his dissertation research.

“I did my elementary and high school education in Hungary, where we started learning English in second grade, German in fourth, and I picked up Latin and French in high school,” Rigó said. “… I still think if Americans spoke a second or third language, it would make them more interesting thinkers.”

On a recent Wednesday morning, Cornell students gathered in a classroom with senior lecturer Adeolu Ademoyo for a class on Yoruba, a Nigerian language spoken by nearly 20 million people. On a screen in the classroom, two students from Columbia joined in the conversation.

“It is a highly creative hybrid environment,” said Ademoyo, who’s been teaching Yoruba for nine years. “This hybrid mode is speaking to the natural way we do things in the contemporary period, whereby we combine both the online and offline in our lives.”

Using new technology built into classrooms at the Language Resource Center at Noyes Lodge, students feel like they’re part of the classroom, even if they’re far away, said Lisa Sansoucy, course coordinator.

Students who sign up for less commonly taught languages have various reasons to study Bengali, Tamil, Dutch or another language.

“We have worked with archaeology students who want to understand Greek and a German studies student who is researching post-Communist German literature and wants to be able to read Romanian literature as well,” Sansoucy said. “Others are ‘heritage’ students who have a language in their family background and want to be able to speak it more fluently.”

But despite the growing number of languages, the number of Cornell students studying foreign languages is declining, said Dick Feldman, director of the Language Resource Center.

Language study among Cornell students peaked in 2008 with 4,683 students enrolled in a language course. But since then, numbers have fallen to 3,998 students taking a language in 2013.

Feldman thinks some of Americans’ hesitation to take languages can be traced to what he called “damaged language learning” in high school, which leads students to believe they’re just not good at languages. An important factor in the recent decline might be student perception that languages aren’t as important to employers as they used to be and a need for more communication about the variety of languages offered.

“Most students come to Cornell partly because they’re excited about all of the courses they can take,” Feldman said. “But it just doesn’t occur to them to take a less commonly taught language.”

To combat that lack of information, the Language Resource Center held a fall Romanian-language film screening and reception and in spring will celebrate African languages, Sansoucy said.

Other efforts to expand language learning opportunities include Foreign Language Across the Curriculum, an initiative that adds language sections to courses offered across colleges, and a new Language Education Council, chaired by Laura Brown, senior vice provost for undergraduate education, and established by President David Skorton and Fredrik Logevall, vice provost for international affairs, which aims to keep Cornell a top university for language instruction.

“Although people believe that language learning is an innate ability, there are other factors that are more important to their success,” Feldman said.

Ademoyo says language learning plays a vital part in our role as global citizens. “The less commonly taught languages enrich and complete our sense of the global,” he said.

“As language and culture learning help us see the world as others see it, I think it is the best action an individual can take to further world peace,” Feldman said.