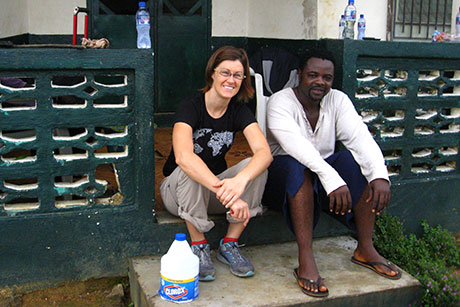 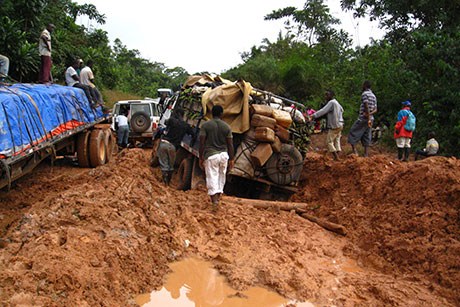 Karlyn Beer
Beer encountered numerous infrastructural challenges in Liberia. Many of the major roads were muddy and filled with overloaded trucks that often got stuck, such as the one pictured, and caused massive traffic jams.

As the largest Ebola epidemic in history continues to ravage West Africa – leaving more than 8,000 dead in 2014 according to the U.S. Centers for Disease Control and Prevention – international efforts to prevent further spread of the disease are ongoing.

One College of Agriculture and Life Sciences alumna, Karlyn Beer ’06, has been at the front lines, aiding the effort through her work as an Epidemic Intelligence Service (EIS) officer with the Center for Disease Control’s Waterborne Disease Prevention branch.

In September, Beer traveled to Liberia, where she spent a month surveying the preparedness of public health officials in that nation’s Maryland County. Beer worked with the county’s health team on protocols for handling Ebola cases. She said safely caring for Ebola patients and preventing further transmission proved to be extremely complex.

“Let’s say you’re a health official and you intercept a car carrying someone who is sick; what do you tell them? Where should they go?” she said. “Do you have an ambulance that you can transport them in that can then be sanitized with chlorine? Is there a clinic with capacity to isolate the person from other people?”

Beer said other on-the-ground challenges include making sure there are nurses and health care workers who are trained, paid, properly equipped and available to look after patients in isolation. The logistical challenges didn’t stop with patient care, she added. If the person dies, a team of people prepared to safely bury the victim is needed – an effort at times complicated if a community deems the burial inconsistent with traditional values.

In addition, Beer measured public knowledge and attitudes about Ebola, and supplemented her surveys with outreach activities such as “contact tracing,” the process of keeping track of friends and family members who have come into direct contact with someone infected with the disease.

“I watched this unfold for this team for the first time,” she said. “And I was just constantly struck by their bravery and the commitment to doing what was needed in a situation where there were almost no resources.”

After returning to the United States last fall, Beer started aggregating the results of her surveys. That data will help Liberian officials and others better prepare for combating Ebola outbreaks.

“We’re working side by side with Liberia, and getting information to them quickly,” Beer said. “I was only there for a month, and have been working on analyzing our data; meanwhile my colleagues in Maryland County work around the clock. They can’t just leave. Since September, they’ve had very few new cases and the situation in Liberia has improved. So I think that’s a huge testament to all the colleagues out there.”

Beer, who lives in Atlanta, entered the EIS program in June 2014 after attending the University of Washington, where she earned her master’s degree in epidemiology and a doctorate in molecular and cellular biology.

But her interest in fighting diseases, she said, can be traced to her time at Cornell. As an honors undergraduate researcher in Dean Kathryn J. Boor’s Food Safety Lab, Beer investigated Listeria monocytogenes virulence and gene regulation. Beer credits that experience, as well as a semester studying abroad in South Africa, as inspiration for taking her research beyond the lab and out into the world.

“Cornell reminded me that you have to stay in touch with the people whose lives and diseases you’re studying,” she said. “Kathryn was a fantastic mentor. She really loves science and she made me love it too.”