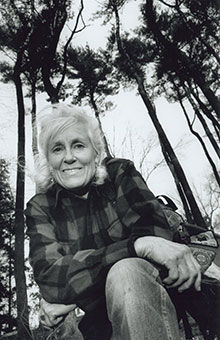 But they weren’t alone.

Women have played a key role in conservation science since it began and in the past century few played a larger role than author and scholar Anne LaBastille, ’55, Ph.D. ’69. LaBastille’s Thoreau-inspired “Woodswoman” series of books encouraged generations of women to enter the natural sciences.

Now one more gift from LaBastille (1935-2011) will help assure future female scholars can pursue their dreams.

On Nov. 19, 2014, professors, students and admirers gathered in Fernow Hall to commemorate LaBastille’s life and announce the creation of the Woodswoman Scholarship Fund. The $300,000 self-sustaining scholarship fund was established by the estate of LaBastille, who was an adjunct professor in Cornell’s Department of Natural Resources, to provide financial assistance to female doctoral students with demonstrated need who study conservation or natural resources. One scholarship will be awarded each year by a committee of Natural Resources professors, with the first award expected for the 2015-16 academic year.

“She was truly a trail-breaker, a fiercely independent woman who could never sit still. Whenever she hit a wall, she broke right through it,” said Leslie Surprenant, the director of the Office of Invasive Species Coordination at the New York State Department of Environmental Conservation and a close friend to LaBastille. “Anne wasn’t going to accept that she couldn’t work in the field. Her life goal became ensuring that she and other women would have the opportunities of outdoor fieldwork in the sciences.”

LaBastille became the first female Audubon Society tour guide, a position in which she refused to conform to gendered dress codes (she said skirts got in the way). She operated one of the first eco-tourism businesses in the United States. She was the first Adirondacks Park Agency Commissioner to have a scientific background. LaBastille also created a natural wildlife reserve surrounding Lake Atitlan in Guatemala to protect the flightless giant grebe, for which she won the World Wildlife Fund gold medal in 1974.

“It can be easy to forget how much resistance she met throughout her life because she was able to accomplish so very much,” said Catherine Smith, a staff member in Natural Resources and one of the organizers of the event. “Anne had always been one of my role models. Anne’s inspiration is part of the reason I’m where I am professionally today.”

“I think her greatest legacy is to the women in natural resources and conservation,” said Gemara Gifford, a graduate student in the field of natural resources. “I see a lot of aspects of what I’m trying to do in the work she did, and know that I probably wouldn’t be here if she hadn’t paved the way for women.

Anne LaBastille’s papers are available through the Division of Rare Manuscript Collections of Cornell University Library. Video of the Anne LaBastille tribute and Woodswoman Scholarship Fund dedication can be seen here.

Celina Scott-Buechler is a student writer in the College of Agriculture and Life Sciences.