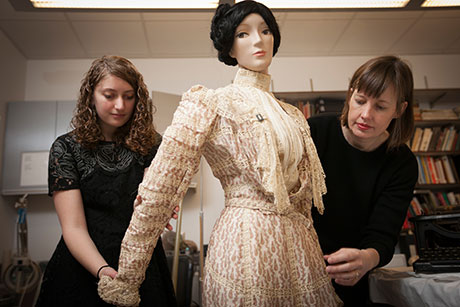 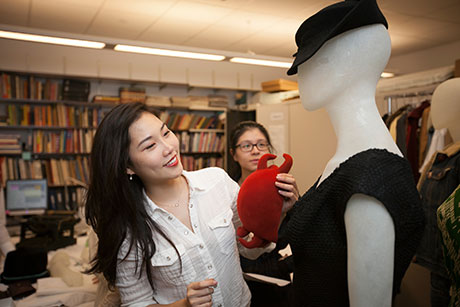 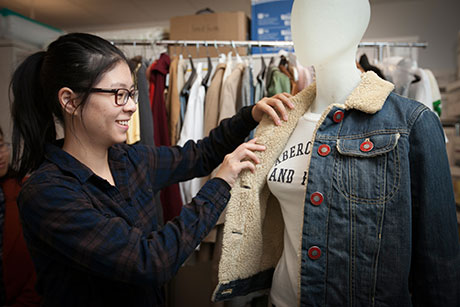 As late as the mid-1960s, female Cornell students were required to dress formally for dinner, though the code was loosening to allow pants to class. Pushing for equality, women of the time devised “dinner dresses” – garments durable and flexible enough to pull from their backpacks and slip over their everyday clothes en route to the dining halls.

This throwaway attire has been lost to history, but a new exhibit, “150 Years of Cornell Student Fashion,” opening Feb. 2 in the Human Ecology Building, brings the style back to campus. Consulting with Laura Bowman Gray ’66, MAT ’67, Catherine Blumenkamp, a graduate student in the field of apparel design, sewed a replica dinner dress, which will be displayed with other ensembles worn by Cornell students dating back to 1865.

The dinner dresses galvanized women against inequality, according to Gray, taking root with the rising feminist movement, and by 1968 the university had abolished the dress code, allowing women to dress as freely as men. “It was my awareness of inequalities between the way male and female students lived that moved me toward a position to support feminism and equality for women,” Gray added.

Curated by fiber science and apparel design (FSAD) assistant professor Denise Green ’07 and six students, the sesquicentennial exhibit includes Blumenkamp’s refashioned dinner dress and dozens of original items selected from the Cornell Costume and Textile Collection and Cornell Library’s Rare and Manuscript Collections and donated by alumni and Ithaca community members. Among the treasures: a Cornell ROTC uniform from the World War I era; a freshman beanie from the 1950s; rompers and other womenswear fabricated by home economics students in the 1930s; Reunion jackets spanning 1915-1950; and technology used by students – from a behemoth turn-of-the-century typewriter to early computers to smartphones.

“Our goal was to document what Cornell students wore as a way to show the history of this institution,” said Green, who dedicated the exhibit to late FSAD professor Charlotte Jirousek, who actively collected examples of student dress for 20 years as curator of the Cornell Costume and Textile Collection. “Fashion tells us a great deal about social mores and cultural contexts of different time periods and allows us to trace the battle for equal rights by women and minorities and other important changes throughout Cornell’s history.”

Not to be missed, Green said, is a white graduation dress worn by Eva Pitts, a daughter of abolitionists who in 1875 became the first woman to earn an advanced degree at Cornell. (Her sister, Helen, would later marry Frederick Douglass.) Pitts’ 20-inch-waist gown, with a bustle in the back and made out of gauzy pineapple fiber, is so tiny that it required a special miniature dress form. It is juxtaposed with a current ensemble – black tights and a red Cornell spirit jersey – to show the evolution of female student styles over more than a century.

As part of Green’s empirical research class last fall, Samantha Stern ’17 investigated Pitts’ story for a display case on Cornell’s earliest days. To delve into her life, Stern studied undergrad scrapbooks preserved by the library, newspaper clippings and other original materials with assistance from college archivist Eileen Keating. For later periods, the class interviewed Cornell alumni to learn about fashion trends and social movements. From piles of source material, they winnowed their cases down to a few garments, photos and artifacts to fit their designated era.

“I love that clothing has a story and can instantly transport you into another lifestyle and time period,” Stern said. “You are standing in the shoes of past Cornell students when looking at these pieces.”

Green and students will host a public opening reception Feb. 2 from 4:30-6:30 pm. The exhibit, to be on display through Reunion 2015, is located on level T of the Human Ecology Building.