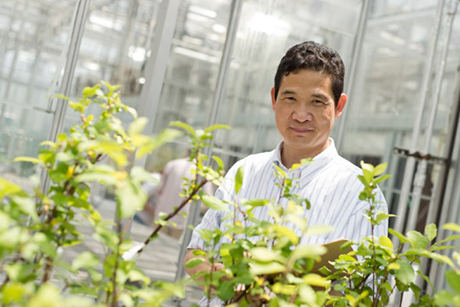 A Cornell-U.S. government research team is poised to transform the shape of trees and orchards to come, thanks to a $1.5 million grant from the National Science Foundation Plant Genome Research Program.

The research team is seeking to uncover genes and gene networks that underpin how apical control – the inhibitory effect on a lateral branch’s growth by the shoots above it – influences branch growth in apple and peach trees.

By discovering the genes that determine apical control, researchers will be able to change the architecture of individual trees – raising the angle of branches, which in turn will allow more high-density planting and transform the layout of orchards. Among the numerous benefits of such a breakthrough: more efficient use of land space, improved productivity, greater industry profitability and increased sustainability.

“If we can somehow control a branch’s direction of growth, the increase in size and the rate of growth, this would really help the fruit growers’ management in the orchard,” Xu said. “Currently we spend a lot of money keeping trees in good shape for high-quality fruit and high-yielding fruit. That is influenced by the tree’s architecture.”

The three-year, $1,556,406 grant, announced in December, includes an outreach component that will provide research training in plant genomics for undergraduate and high school students from underrepresented minorities. Engagement efforts will continue with a series of workshops on plant architecture and biotechnology solutions aimed at growers, agricultural industry personnel and the public. The researchers also will develop short courses on a novel sequence-based mapping and gene identification method that uses pooled genomes, or “pnomes,” for fellow scientists working on trees and other horticultural crops.

“This grant is an excellent example of the benefits of partnerships between USDA and Cornell scientists,” said Susan Brown, the Herman M. Cohn Professor of Agriculture and Life Sciences and the Goichman Family Director of the New York State Agricultural Experiment Station. “This research partnership will yield important information on genes that control plant architecture. That step is a prerequisite needed to develop trees suited to future robotic or mechanical harvesting.”

Xu sees the project as the beginning of a much deeper inquiry into gene networks and molecular pathways of trees.

“Basically we are opening up a door for entering a much larger research area,” said Xu, who previously received a $410,000 grant from the Agriculture and Food Research Initiative for studying a key gene involved in acid production in apples. “We are really doing something that has been ignored, probably because of the difficulties of trees. So the field is relatively untouched.”