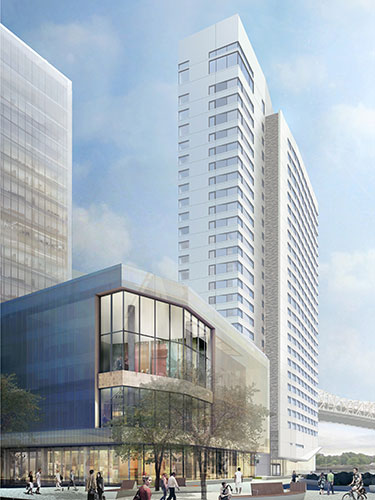 The center will be a gathering space for the tech community and a place for leveraging the campus’s impact on technology beyond its degree programs. It will be part of the campus’s first phase, on which construction began last month on Roosevelt Island and is due to open in summer of 2017. The new executive education center will open at a later date than the rest of construction in phase one.

“This is a transformative gift that will help enormously to advance our mission of bringing academia and industry together,” said Cornell President David J. Skorton. “The campus will welcome everyone interested in using technology to advance the economy and to make the world a better place, and the Verizon Executive Education Center will be at the center of it.”

“Cornell Tech is a place for technology innovators and leaders in New York City and around the world, and we are thrilled that Verizon is joining with us to create an executive education center built to provide novel educational and collaborative programs focused on the digital age,” said Cornell Tech Dean Daniel Huttenlocher.

With its support, Verizon is recognizing the pioneering leaders and technologies Cornell Tech is cultivating. The gift will facilitate direct collaboration between companies and Cornell Tech students to bring cutting-edge ideas to market. The center’s programs and events also will allow Verizon to develop customized programs for its executives and customers, facilitating learning across many sectors.

Verizon’s corporate partnership with Cornell spans decades. It includes recruitment of students into internships and full-time positions, as well as generous philanthropic support.

“Our donation to Cornell Tech is an investment in the future and fits perfectly with our mission to use communications technologies to solve big challenges and make people’s lives better,” said Verizon Chairman and CEO Lowell McAdam ’76. “The Verizon Executive Education Center will be a magnet for developers, entrepreneurs, educators and innovators across all industries, building on the great talent and creativity we already have in the tech sector here in New York City.”

In addition to the Verizon Executive Education Center, Cornell Tech’s first construction phase will include its first academic building, designed by architect Thom Mayne of Morphosis Architects. Taking its cue from the tech world, the building is a departure from traditional academic facilities, with an open plan and collaborative work spaces. It also is planned to be among the largest net-zero energy buildings in the United States, with all of its power generated on campus.

The campus also will include a corporate co-location building, designed by Weiss/Manfredi and developed by Forest City Ratner Companies. This building will fuse academia and industry by providing space on campus for established tech companies and startups.

A residential building, designed by Handel Architects and developed by Hudson and Related Companies, will be constructed to house faculty, staff and students.

When fully completed, the campus will span 12 acres on Roosevelt Island and house approximately 2,000 students and hundreds of faculty and staff. The campus master plan was designed by Skidmore, Owings & Merrill with James Corner Field Operations.