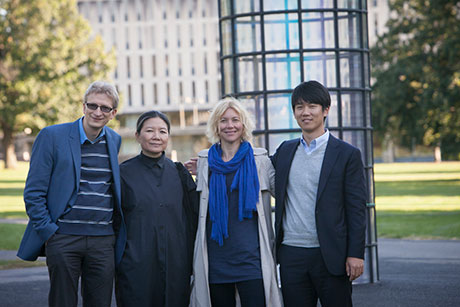 A temporary art installation on campus, part of the Cornell Council for the Arts’ (CCA) inaugural biennial last fall, will be the subject of an upcoming PBS documentary.

Biennial artist-in-residence Kimsooja’s “A Needle Woman: Galaxy was a Memory, Earth is a Souvenir,” created in collaboration with Cornell materials scientists and the artist’s son, architect Jaeho Chong, was installed on the Arts Quad in September.

“Art:21 [producers of the PBS series ‘Art in the 21st Century’] came to campus with an interest in Kimsooja’s project as a innovative collaboration and a new direction for the artist,” she said. “They’re producing a documentary on the project and the nano fabrication process used to make the iridescent polymer on its surface for PBS.” A screening on campus may happen in the spring, she added.

Fostering interaction between artists and scientists on collaborative projects, the biennial explored creativity and research on the micro scale. The event was conceived to underscore the importance of the arts in a research university setting, highlighting the participation of faculty and students; and to raise Cornell’s profile in the arts internationally.

“The needle was the biggest investment on the part of the university, and it has had the most impact, for the number of people it touched,” CCA Director Stephanie Owens said of the biennial’s centerpiece. “A lot of people have expressed affection for it. I’ve had several comments from students, saying ‘it’s nice to see art on the Arts Quad.’”

Originally scheduled to come down in December, the 46-foot-tall structure will remain through the spring. Cornell materials scientist Uli Wiesner and a team in his laboratory developed polymer film to create iridescent effects on the structure’s panels.

“A Needle Woman” was one of several projects attracting worldwide media attention during the semester-long biennial, “Intimate Cosmologies: The Aesthetics of Scale in an Age of Nanotechnology.” Several collaborative projects were presented and displayed on campus, along with a symposium, artist’s talks and other events, including the first American exhibition by artist and “Nanoart: The Immateriality of Art” author Paul Thomas.

Kimsooja’s work at Cornell also appeared in DesignBoom, in the Korean magazine Space and in Artforum, among other outlets; while Wired featured professor of architecture Jenny Sabin’s ColorFolds project, an experimental structure displayed in Sibley Hall with material that mimics human cells.

“It was wonderful to see collaborations between scientists and artists developing at Cornell. I hope we have more of them in the future,” said María Fernández, associate professor of the history of art, who moderated a biennial symposium featuring the artists and Cornell scientists.

Paula Horrigan, associate professor of landscape architecture, called the biennial “a precedent-setting dialogue and discourse on art and science at Cornell.”

Robert Hovden, a Cornell postdoctoral scientist in applied physics, created and displayed a series of nanoscale reproductions, etched on silicon wafers, of works of art by Henri Matisse, M.C. Escher, Rene Magritte and others.

Rendered in a form much too small to see, Hovden’s work questioned the way we define original works, copies and plagiarism. Art critics discussed the project, which was also covered by CNET, Wired and other media.

“The biennial was an enormous facilitator for discussion and collaboration between art and science at Cornell, and was crucial to the success of my project,” Hovden said. “It provided a platform, and afforded me the opportunity to speak to an audience outside of my field of physics. I hope the CCA will continue to work with scientists to deliver new concepts to the art world.”

Owens said the theme for the 2016 biennial will be announced in April with a call for proposals.

“People really enjoyed the opportunity to see what art and science can share, and what can happen productively at that intersection,” Owens said. “We saw scientists coming to art lectures, and casting polymers like printmakers. It’s my hope that the CCA will be able to facilitate more of these unusual encounters in the next biennial.”