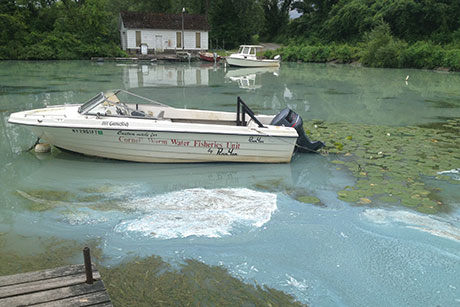 Provided
A Cornell research boat sits amid blue-green algae and other growth near the shore of Oneida Lake, which will have a different make-up by 2099 because of climate change.

By the end of this century, the temperature of Oneida Lake – New York state’s largest interior lake – will likely be higher by about 6 degrees Fahrenheit. This would be enough to remove oxygen from its bottom waters, alter its species composition and eradicate its remaining cold water fish species, report Cornell researchers in the journal Ecological Modelling.

With an area of about 80 square miles, Oneida serves as the centerpiece of a large watershed. Prevailing west-northwesterly winds cause its shallow waters to mix frequently through the ice-free months. Between mixing events, the lake’s surface water warms and becomes less dense then the colder bottom layers. Large temperature differences between the surface and bottom layers result in strong stratification, and winds are needed to induce mixing.

As the climate changes, the temperature difference between the layers is expected to increase and last longer. By 2099 Oneida Lake could see an additional 61 consecutive days of stratification, according to the researchers’ projections.

“Increased stratification and water temperatures are likely to cause more eutrophic [nutrient-rich] conditions in the future, including more cyanobacteria [blue-green algae] blooms,” reports Amy Lee Hetherington, a doctoral candidate in natural resources and the lead author of the study. Her research focuses on ecological forecasting and the impacts of environmental stressors on lake dynamics.

Looking forward only to 2050, Oneida Lake’s water temperatures from April through November will likely increase by about 2.5 degrees Fahrenheit, but 2011 simulation temperatures already align with midcentury predictions.

While cyanobacteria blooms are not new to Oneida Lake, health officials have closed the lake’s beaches several times in the past five years due to their toxins. “Research indicates that cyanobacteria blooms will likely increase with climate change,” said Hetherington, who will be investigating the timing and composition of the blooms and their implications for the water body’s future.