Before Willard Straight Hall opened in 1925, students, faculty and campus visitors gathered in Ithaca’s downtown hotels, boarding houses and fraternities, as well as at campus dining halls at Sage, Risley and Balch. The Department of Home Economics had established a cafeteria in 1911 and the Christian Association ran a coffee house in Barnes Hall, but there was no student union, no central place to eat and socialize.

It bustled with music, dance recitals, comedic plays and club meetings. The Straight became the campus crossroads and the site of an international scientific conference. Publisher Frank Gannett arranged for the New York State Publishers Association to meet there in 1926. That same year, more than 1,500 alumni descended on the Straight for reunion, and the Association of College and University Unions held a convention there.

‘He tied winged sandals to my feet …’

More than stone and mortar built Willard Straight Hall; it rests on a foundation of love. Willard Dickerman Straight, Class of 1901, was an artistic, boisterous architectural student with a derring-do attitude who got things done. To raise money for athletics, he established what became Spring Day – a precursor to Slope Day – and organized a College of Architecture Day on St. Patrick’s Day – precursor to today’s Dragon Day. His resume is dizzying: Straight joined Delta Tau Delta fraternity, the Savage Club, Bench and Board (a junior “banqueting” club) and Mermaid (a senior “banqueting” club). He worked for the Widow humor magazine, the Cornellian yearbook and served as editor in chief of the Era, a campus magazine. 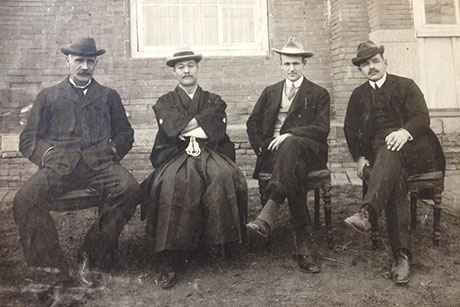 Flanked by the British consul, the Japanese consul-general and the German consul, Willard Straight, the American consul-general, pose for a photo at Mukden, Manchuria, circa 1906.

The son of educators, Straight was born in Oswego, New York, in 1880. After attending Bordentown Military Institute, Straight came to Cornell to study art and architecture. Following graduation, he spent the next decade in the Far East. In 1902 he wrote about China: “As for the life, I like it better all the time. It’s full of interest and color and there is no end of chances for sketching, sketching, sketching.”

Embracing his own sense of adventure, Straight joined the Chinese Imperial Maritime Customs Service, then worked as a correspondent for Reuters during the Russo-Japanese War. In 1905, Straight became private secretary to U.S. Resident Minister Edwin V. Morgan in Seoul, Korea, and soon was the U.S. vice-consul. A year later, President Theodore Roosevelt appointed him consul general in Mukden, Manchuria, and in June 1909, Straight was appointed Peking representative of the American Group, a consortium of bankers promoting Chinese investment.

He married heiress Dorothy Whitney in Geneva, Switzerland, in 1911. Their honeymoon started in Europe and continued via the Trans-Siberian Railroad to Peking. Dorothy said of Willard: “He tied winged sandals to my feet, and I began to soar to new heights of exploration.”

Willard and Dorothy Straight had three children: Whitney, Beatrice (who won the 1977 best supporting actress Oscar for the film “Network.”) and Michael. The Straights helped to found Asiamagazine and The New Republic. During World War I, Willard Straight enlisted in the U.S. army as a major and organized the War Risk Insurance Bureau in Europe. On Dec. 1, 1918, he died in Paris of pneumonia, a complication of the Spanish flu, weeks after the armistice.

Willard Straight always wanted to improve the student experience at Cornell. In his will, he directed Dorothy to do “such thing or things for Cornell University as she may think most fitting and useful to make the same a more human place.” 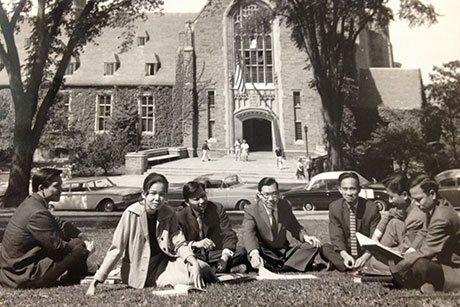 Provided
Students from Thailand gather in 1962 on the knoll across Central Avenue (now Ho Plaza, a pedestrian mall) from Willard Straight Hall. 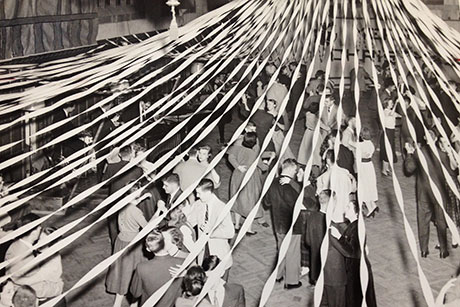 For 90 years, the Memorial Room in Willard Straight Hall has hosted dances, lectures and banquets. Students groove to a swing dance band on the parquet floor during this 1950s dance. 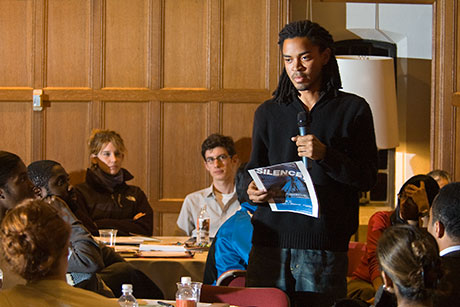 Steven Gorgos/University Photography
Since 1925, Willard Straight Hall has been a crossroads for students to gather and accomplish endeavors. Here, Zachary Murray '12 shares ideas from a diversity forum in the Memorial Room in 2008.

After discussions and investigation of other schools, like Stanford and Berkeley, Dorothy Straight determined to build a student union for Cornell as a memorial to her husband.

She used his estate and her own money to fund the million-dollar project. President Livingston Farrand wrote: “I can think of no gift more welcome than this of Mrs. Straight. The problem of providing a social center for student life is as difficult at Cornell as at all other American universities. … It is particularly gratifying to the university that … [the building] will be forever associated with the name of Willard Straight who, both as a student and alumnus, personified the best traditions of Cornell.”

The building and its decor commemorate Straight’s life and ideals. The lobby murals, designed and painted by Ezra Winter, a New York muralist – assisted by Alison Mason Kingsbury, who while working on the project met and married a young history professor, Morris Bishop – depict the phases of the ideal character as exemplified by Straight and his Asian influences.

The mural’s paint is rich in casein (milk curd), which was mixed with lime and powdered color and painted with stiff brushes on the plaster walls, Kingsbury later explained.

Artist Richard Bradley collected milk curd from the Cornell dairy every morning for painting that day. The mural depicts Courage – a young man attempting to subdue a unicorn; Chivalry – a knight in armor; Adventure – a ship in full sail, evoking Straight’s trip to China; Diplomacy – two Western and Chinese men meeting as friends; the Judgment of Paris – appreciation of beauty and love; Imagination – the writer, musician and artist; Philosophical Wisdom – the wise man oblivious to the treasure at his feet; and Optimism and Joyousness – flowers springing from the bones of a dead dragon.

In the Memorial Room, lizards carved on the stone fireplace also evoke Asian art themes. The inscription is an excerpt from a letter Straight wrote to his son Whitney from France: “Treat all women with chivalry … Respect of your fellows is worth more than applause … Understand and sympathize with those who are less fortunate than you are ... Make up your own mind but respect the opinions of others ... Don’t think a thing right or wrong because someone tells you so ... Think it out for yourself, guided by the advice of those whom you respect ... Hold your head high and keep your mind open ... You can always learn.” 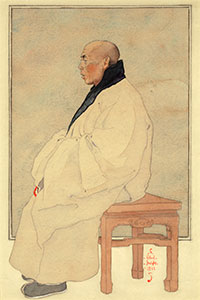 As a talented artist since childhood, Straight drew and painted often. He painted this Buddhist monk in 1911 when he lived in China, but he left the following year during the Chinese revolution.

In the early years, some of Straight’s own watercolors decorated the building. The Browsing Library contains a set of the illustrations he created for Some Men of East Asia, published by Asia magazine. On top of each bookshelf rests a scale model of a sailing ship, possibly from Straight’s own collection. A portrait of Straight by Caesar R. Diorio, given by Michael Straight, hangs over the fireplace.

The room on the southwest corner of the building was originally a women’s lounge. In the early years, women entered through a separate door and had separate facilities. The room’s décor includes three 16th-century Chinese ink-and-watercolor silk panels and four Chinese Qing dynasty ancestor portraits, all originally part of Willard and Dorothy Straight’s own collection.

The family continued its interest in the building. In 1940, for the 15th anniversary celebration of the building, Beatrice Straight played Viola in a production of “Twelfth Night.” In 1951, Dorothy Whitney Straight Elmhirst donated many additional watercolors and drawings by Willard Straight. Their son, Michael Straight, developed and supported a permanent art collection for display in Willard Straight Hall.

At the dedication of Willard Straight Hall in 1925, Dorothy Straight said: “The formative factor in his own life was his contact with people, a group of relationships through which his personality progressively expanded … it is our hope that the [student] union may in some measure re-create life in these terms for others…”

In the 114 years since Willard Straight graduated, his infectious enthusiasm continues to converge with today’s modern Cornellians. His vision of “a more human place” and Dorothy Straight’s tangible, stone and mortar interpretation of that vision – Willard Straight Hall – remains relevant today.