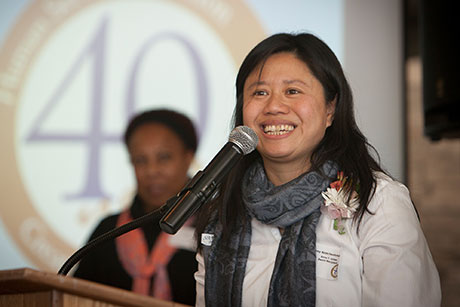 A Cornell staff member for more than a decade, Amy Somchanhmavong, MILR ’02, was recognized as a “distinguished volunteer in Tompkins County” and received the 21st annual Anne Tompkins Jones Awards for Community Service March 19. The award was given during the Human Services Coalition of Tompkins County annual luncheon at the Country Club of Ithaca.

As associate director of service learning at the Public Service Center, Somchanhmavong directs its PreK-12 Outreach Programs and works with Cornell’s faculty members to connect them with members of the local community. But she is best known in Ithaca for co-founding the Ithaca Asia American Association and for its Finger Lakes Dragon Boat Festival, which is celebrating 10 years in July.

Somchanhmavong, who was born in Taiwan and spent most of her childhood in the Dominican Republic, came to Ithaca about 15 years ago and has been an advocate for and supported refugee and immigrant families. Her husband’s family was the first Laotian family to resettle in the Tompkins County area.

“I and the Public Service Center staff and students were delighted to learn that Amy received such distinguished recognition from our local community in Tompkins County,” said Leonardo Vargas-Mendez, executive director of the Cornell Public Service Center. “Amy is a concerned citizen who … has become an economic, cultural and community development landmark for Tompkins County. We are proud to be her colleagues and friend.”

At the luncheon, Lynette Chappell-Williams, Cornell’s Title IX coordinator and associate vice president for inclusion and workforce diversity, gave the keynote address on “The Future Workforce.”

She said the workforce is becoming increasingly diverse in ethnicity, culture, age and work style. Older workers are remaining in the workforce instead of fully retiring, she said, and it is common to see up to four generations of workers in one place, all with different work styles. An increasing number of military veterans and people with disabilities are entering the workforce, and occupations in health care and information technologies are growing. Over the next two decades, immigration will account for most growth in U.S. labor, with greatest increases in Hispanic and Asian workers, she said.

Corresponding to those demographic changes are new regulations to move the workplace toward greater equity, Chappell-Williams said, including hiring veterans and people with disabilities and, in the areas of sex discrimination, sexual orientation and gender identity.

Social media and information technologies already have helped distribute decision-making, she said, and flexible workplaces, wherein staff work from home, share jobs or otherwise shift the time and place of their work, will become the norm.

How can organization leaders prepare for these changes? Look for and hire staff who have problem-solving, collaboration, team-building and communication skills, can work with people from different backgrounds, are digitally literate, focus on innovation, ask questions, seek solutions and maximize impact, she said.