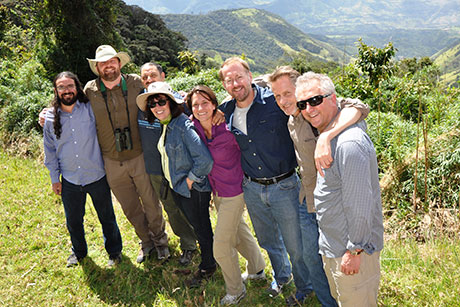 What is the best way to conserve biodiversity in Ecuador’s Andes Mountains?

Start with the bears.

Ecuador’s mountain forests are a hotspot of rich biodiversity, but many species are threatened by increased deforestation and fragmentation. Now, a Cornell research team is joining local efforts to help design a socio-ecological corridor that could help save endangered, threatened, endemic species in the country’s Andes region.

In 2013, the secretary of the environment of the Quito Municipal District established an ecological corridor and conservation program for the endangered Andean bear. Easily recognized by its distinctive facial markings, the Andean bear is considered an “umbrella species,” with spatial requirements and habitat needs similar to other species of concern in the region. Based upon the initiative of multiple local organizations, the Cornell team is providing science support to help expand the designated ecological corridor in Quito to connect with the Cotacachi-Cayapas Ecological Reserve to the north and the Illinizas Ecological Reserve to the south.

“The optimal design of this corridor is a large collaborative effort that would integrate the ecological, social and economic concerns within the region,” said Angela Fuller, team leader and Cornell assistant professor of natural resources.

In addition to conserving biodiversity, the project will also consider ways the corridor could positively impact the livelihoods of the surrounding communities by exploring financial incentives and productive alternatives for landholders to conserve and reforest their land. Alternatives include payment for ecosystem services, conservation easements, agroforestry, shade-grown coffee and ecotourism. Many of these have already been initiated and provide a strong basis for further development.

Undertaking such a multifaceted project requires an interdisciplinary approach that is reflected in the diversity of Fuller’s team, which includes Carla Gomes, professor of computer science; Jim Lassoie, professor of natural resources; professor Greg Poe, who specializes in non-market valuation and environmental policy in Dyson School of Applied Economics and Management; and Andy Royle, a research statistician with the U.S. Geological Survey’s Patuxent Wildlife Research Center.

The Cornell team is helping design the corridor by first estimating the number of Andean bears and learning more about their movements and resource use. The team is working with University of San Francisco de Quito researcher and Andean bear expert Santiago Molina, who has set “camera traps” at various sites throughout the mountains. Spatial models will be used to estimate bear density and landscape connectivity for the potential corridor.

“We’re going to let the bears tell us what the connectivity is,” Fuller said.

In the near future, they will begin adding other components to the project such as metrics related to endemic bird species and possibly even rare orchids. For this work, the team will be collaborating with Amanda Rodewald, associate professor and director of conservation science and Chris Wood, eBird project manager with the Cornell Lab of Ornithology.

In January, Fuller and her team traveled to Ecuador for a week to meet with project partners and local stakeholders. The team ventured into the cloud forests with Molina, and they got a firsthand look at the challenges of studying the species.

“It’s very time-intensive to do work in this area,” Fuller said. “You can place a trail camera on top of a mountain ridge, but it will take you an entire day to go check on it.”

The team, currently funded through a $130,000 Academic Venture Fund grant from Cornell’s Atkinson Center for a Sustainable Future, hopes to return to Ecuador in the early summer. To undertake the research needed to design such a socio-ecological corridor, additional grant funding over an extended time period will be needed – and Fuller cautions the entire process could take years, maybe even a decade.