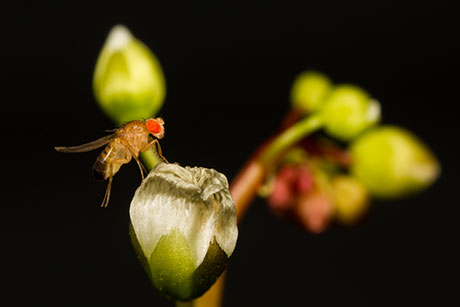 David Duneau
Many genes in fruit flies perform similar functions in humans, including those that are influenced by diet. The image shows a male Drosophila melanogaster.

A scientific finding in fruit flies on the interplay of genes, nutrition and immunity provides insights that may one day inform personalized medicine.

The study, published in the March 12 issue of the journal PLOS Genetics, demonstrates that specific genes influence the effect of dietary nutrition on resistance to infection.

While future studies will explore these relationships more deeply, many genes in fruit flies perform similar functions in humans, including those that are influenced by diet.

“It’s been known for a long time that there is an interaction between genes and environment, so that a particular gene might have an important role in one environment, but in another environment, it might have a different role, or no role,” said Robert Unckless, the paper’s first author and a postdoctoral research fellow in the lab of Brian Lazzaro, associate professor of entomology and co-author of the paper.

Now, technological advances have made it possible to observe the genetic basis for effects caused by the environment. With regard to humans, the findings offer hope for pursuing inquiries into how genes (or genetic variation) can interact with diet or stress and provide “a more complete picture to predict heart disease or an individual’s response to infectious disease” and improve treatments, Unckless said.

In the study, the researchers used 200 inbred lines of fruit flies (Drosophila melanogaster), each of which has had their genomes sequenced. Within each line, the siblings are all clones, making them genetically identical. For each line, some flies were reared on a low-glucose diet while others were reared on a high-glucose diet for two generations. The flies were then infected with a natural bacterial pathogen of D. melanogaster. Previous work has shown that diet has a significant influence on a fly’s ability to respond to infection. Unckless and colleagues found that across all the lines, experimentally infected flies reared on high-glucose diets had higher amounts of pathogenic bacteria in their systems and higher probability of dying from the infection.

Then, across all 200 lines, the researchers examined the genomes to see if any mutations in the genes were associated with the flies’ immune responses and whether those responses were specific to one diet or another.

Some of these genes were known for their role in immunity, while others have no known connection to immunity but still were associated with immune system response, Unckless said. A few genes were only associated with immune system response in flies with high glucose diets. For example, flies with conditions that might correlate with obesity in humans had different mechanisms for controlling how their immune systems responded, Unckless said.

By working with fruit flies as a model system, the researchers gained significant insights in a few years for relatively little cost. A similar experiment in mice, for example, would cost many times more and take many more years, Unckless said.

Susan Rottschaefer, the manager in Lazzaro’s lab, is a co-author of the study.