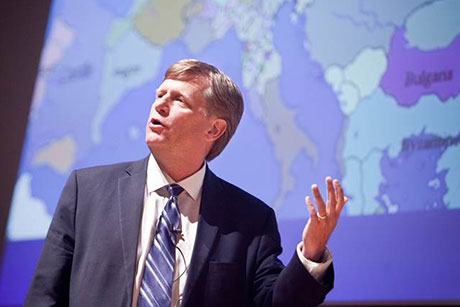 Before a crowded Statler auditorium audience March 16, former U.S. ambassador to Russia Michael McFaul tackled the question haunting U.S.-Russia relations: “What happened … why are we in this mess?” In delivering the Henry E. and Nancy Horton Bartels World Affairs Fellowship lecture, McFaul looked at recent history to decipher the current chill.

McFaul – a self-described “recovering bureaucrat and aspiring professor” – served as U.S. ambassador to Russia from 2012 to 2014. Relations between the two superpowers are more strained today than anytime in the last 30 years, McFaul said. Today, 83 percent of Russians have a negative view of the U.S., he said, but just three years ago, 60 percent of Russians had a positive of view of the U.S. McFaul further noted there have been a number of signs of conflict between the two countries, such as Russia’s removal from the G8 in 2014.

McFaul first proposed that this, perhaps, is typical international politics, and we’re seeing expected changes in the balance of power among nations. In other words, this cycle might simply be “the natural order of things.” While Russia was weak after the collapse of the Soviet Union, the country is again rising as a great power and beginning to “press against” weaker powers. However, referring to the conflict in Ukraine, McFaul noted that not all rising powers attack their neighbors. It’s likely that something else is going on, he suggested.

Maybe America pushed too hard against Russia, McFaul said, or maybe President Obama’s administration was simply too weak dealing with Russia. But he cited evidence to discount both these theories. McFaul alluded to the recent “reset” between the United States and Russia – the two states recently cooperated on a number of initiatives, including the New Start Treaty, the Northern Distribution Network and passing of UNSCR 1929. McFaul also opined that compared with President George W. Bush, Obama’s response to Russian actions has been far more forthright, and he rejected the view that Obama was weak on Russia.

A key event in domestic Russian politics, McFaul said, was former Prime Minister Dmitry Medvedev’s withdrawal from the Russian presidential elections in September 2011. While Russian President Vladimir Putin takes a zero-sum view of the world, seeing the United States as a competitor rather than a partner, Medvedev had a win-win perspective, similar to Obama’s, McFaul said.

Putin has a different mental model of the relationship between Russia and the United States. Recently, McFaul suggested, Putin has used the U.S. to legitimize the falsified Russian Parliamentary election of December 2011, which provoked massive protests, and as a means to legitimize his regime and counter dissent. Essentially, McFaul said, the Russian leader has “resurrected” the United States and its leadership as the enemy and stirred hatred of the West in his country.

McFaul said that the current state of the U.S.-Russia relationship is troubling. While Putin’s previously dual impulses of wanting to cooperate with the Western world yet remain untrusting and paranoid of the United States and its intentions were evident, we now exclusively witness the latter. Although McFaul intimated that history suggests Russia and the United States will ultimately avoid military conflict, he questioned how Putin can possibly back down now with his current full-steam-ahead approach.

The Bartels lecture was sponsored by the Mario Einaudi Center for International Studies.

Aaron Coven ’16 is a writer intern for the Cornell Chronicle.