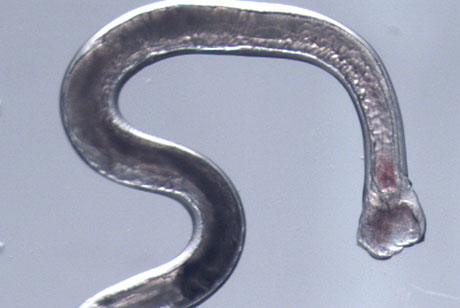 A Cornell-led study of the genome and RNA of hookworm reveals for the first time which genes are activated and deactivated during key phases of infection. The findings may lead to the development of new treatments for these and other parasitic worms, which rapidly develop resistance to drugs.

Hookworm infects more than 400 million people in the tropics and can lead to illness, anemia, stunted development in children, and low birth weight or stillbirth in pregnant women.

Analyzing RNA was key to the findings. While DNA is a static record, like books in a library, the study of RNA provides information of when and which genes are activated or deactivated.

“Getting RNA during an actual infection, that’s the trick,” said Erich Schwarz, a senior research associate in the Department of Molecular Biology and Genetics, and first author of a paper published online on March 2nd in Nature Genetics.

The two most common hookworm species, Necator americanus and Ancylostoma duodenale, do not survive outside of human hosts and are difficult to study, but the versatile Ancylostoma ceylanicum lives in humans, dogs, cats and rodents. The researchers used golden hamsters infected with A. ceylanicum to study the parasites in the lab.

By extracting A. ceylanicum at different stages of infection and sequencing their genetic material, Schwarz and colleagues from the University of Massachusetts, the University of California, San Diego, and the California Institute of Technology isolated which genes played the biggest roles during infections.

The researchers found approximately 31,000 genes that encoded proteins and showed activity in A. ceylanicum’s genome, which the researchers have made publicly available.

Schwarz initially identified protein families known to play a role in parasitic infections, and “then I subtracted them out and looked at the rest of the genome, and I asked the question, are there new protein families that have not been described and can I identify them?”

Schwarz identified three large families of previously unidentified proteins that were strongly expressed during three successive stages of infection caused by A. ceylanicum. These proteins were found by studying hookworms during an actual infection in a live host. “I would not have discovered them in vitro,” Schwarz said.

Schwarz also found more than 70 genes that encode proteins that could be promising drug or vaccine targets. The drug targets are likely important for hookworm survival, but do not exist in mammals, making chemical inhibition safe for people. The vaccine targets included five genes that code for digestive enzymes that are likely needed for hookworms to feed on blood.

In the future, the researchers hope to compare the genomes of other parasites to see similarities and differences, which could provide further insights to treating disease.

Hookworms thrive in tropical climates and mostly infect people by burrowing through the skin. From there, they make their way through the circulatory system, into the lungs, through the trachea to the esophagus and then into the gut, where they mature, feed on blood and can live three to 10 years.

Co-authors include Yan Hu and Melanie Miller in the laboratory of Raffi Aroian at University of Massachusetts, Worcester; and Igor Antoshechkin and Paul Sternberg at the California Institute of Technology.

The study was funded by the National Institutes of Health and the Howard Hughes Medical Institute.