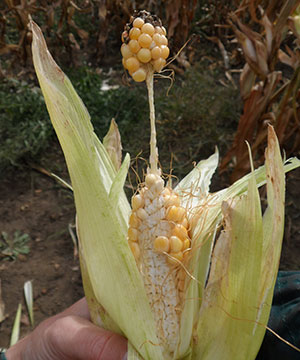 Jason Wallace, Buckler Lab
This deformed ear of corn results from bad mutations that occur randomly each generation. When bad mutations are not removed from breeding populations, they can cause dramatic losses in yield.

Cornell researchers have developed a way to predict bad mutations in the maize genome, addressing a major challenge for breeders trying to grow better crops and feed rising populations. The researchers found regions of the genome that were riddled with such unwanted DNA.

For every gene that contains a desirable trait, many undesirable mutations come along for the ride – a common hindrance for breeders focused on improved varieties. By knowing exactly where the bad mutations are in the genome, researchers can apply new genome editing technologies that allow precise cuts and fixes to be made.

“The technology is now moving forward for us to recognize these bad mutations and edit them out of the genome,” said Edward Buckler, a Cornell and U.S. Department of Agriculture (USDA) research geneticist, and senior author of a March 9 paper in Proceedings of the National Academy of Sciences.

With genome editing, undesired genes can be replaced with a healthy common variant of the gene found within the species, Buckler said.

The study focused on recombination, a natural gene shuffling process in which sections of genomes from each parent are swapped into the offspring.

“If recombination does not occur in a region of DNA, good mutations do not have the opportunity to join together,” said Eli Rodgers-Melnick, the paper’s co-lead author and a postdoctoral researcher in Buckler’s lab. “At the same time, bad mutations can be dragged along with the good, like a rusted trailer with flat tires attached to a souped-up sports car.”

One reason for sex among any species is to break up chromosomes and swap regions of the genome to create new combinations, but “about 40 percent of the genome doesn’t do this well,” said Buckler, who is a USDA–Agricultural Research Station (ARS) scientist in Cornell’s Institute for Genomic Diversity and an adjunct professor in Cornell’s Department of Plant Breeding and Genetics.

In the study, the researchers analyzed markers in the genomes of 7,000 maize varieties – representing the diversity of maize – to determine where crossovers occur and which regions of the genome might stay together as a group. It turned out the junctions where the genome breaks during recombination are very similar across all varieties, making these regions stable and highly predictable.

The researchers also found that the regions of the maize genome with the lowest recombination rates also harbor the largest number of bad mutations. This means the portions of the maize genome most burdened with undesirable mutations will also be the most difficult to improve using conventional, more time-consuming breeding techniques, in which breeders repeatedly cross parents with agriculturally desirable traits to get offspring with the right features.

The researchers note that genome editing is different from genetic engineering, which might introduce foreign genes randomly in the genome. “We are not introducing new genes but precisely fixing bad mutations,” Buckler said. Every variety has a few hundred to thousands of bad mutations.

Peter Bradbury, a computational biologist with the USDA-ARS and a member of Buckler’s lab, is a co-lead author of the paper. Other co-authors include researchers from the Chinese Academy of Agricultural Sciences.

The National Science Foundation, the USDA-ARS and the Ministry of Science and Technology of China supported the study.